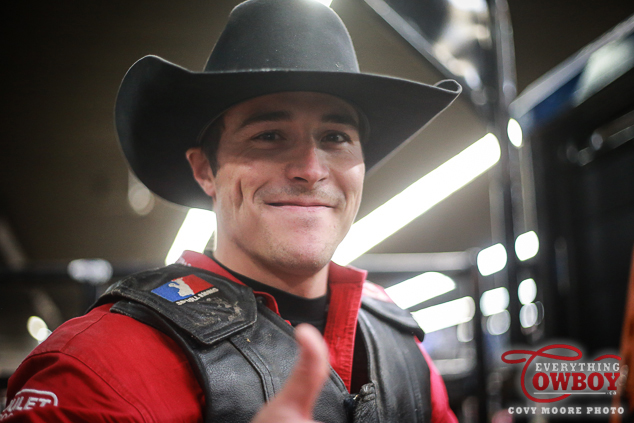 SASKATOON, Saskatchewan — In sports, calling a shot takes some serious cajones. Personally, I haven’t seen it done quite to the effect that Zane Lambert did and made good on at the 2017 PBR Canada Finals.

On Friday night Lambert would ride Finning Lil’ Shorty from the Flying Four crew for 86 points to finish third in the first round of the finals yet fall further behind PBR Canada points leader Brock Radford.

Radford led the way to the finals in the No.1 spot after an incredible span where he went on to win four consecutive events. Lambert would keep steady heading into the finals within striking distance of his second National Title (2013).

After Lambert’s first round ride at the Sasktel Centre, he would be interviewed by Jason Davidson. It wa at that moment that Lambert called his shot when speaking of his second round bull, Crooked Nose from Vold Rodeo.

The Ponoka bull rider said he score would be about 88 points, here’s how it went on Saturday.

When the points were tallied it would be official that he was the champ. With that win he earned a spot at the PBR’s Velocity Tour Finals in Las Vegas for another shot at the PBR World Finals. There Lambert put up his best effort to join fellow Canadian Dakota Buttar at the World Finals.

Lambert would come up short however Canada would proudly be represented at the World Finals by Buttar.

Who will win the PBR Canada National Championship in 2018? Will it be Brock Radford redeeming himself after a second place finish this year? Will it be PBR Global Cup Qualifier Champion Lonnie West? Might Aaron Roy make his return to win a fourth title? Could Dakota Buttar or Tanner Byrne be the champ? Or will it be Lambert going back-to-back for the first time ever to match Roy’s record of three National Titles?