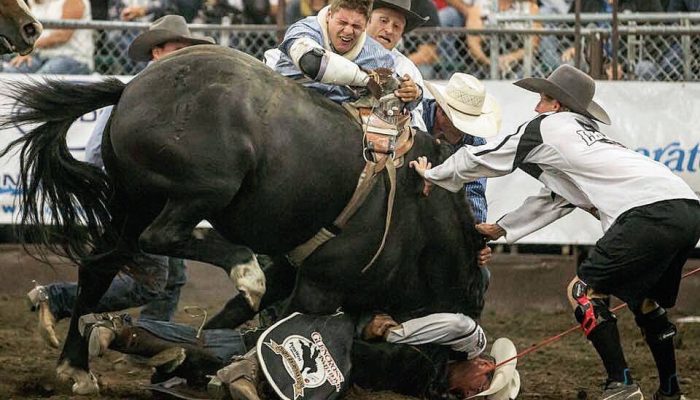 RED DEER, Alberta — Wacey Anderson and I started a podcast called Cowboy Shit recently and the man in the picture above laying flat on the ground is defining that very term.

This is the kind of thing we want to talk about on the show, it’s the essence of what we want to do.

Jeff Resch jumped off his pickup horse and took this wreck on in a way I haven’t seen before.

“I started the ride off feelin strong and confident,” Helmeczi said. “As soon as I got tossed off the side away from my hand I just kept thinking to myself stay to my feet, and focus on what I’ve been taught on how to get out of wrecks.”

Unfortunately for the Esterhazy, Saskatchewan man, he would be knocked out for a bit making staying on his feet impossible.

“Once the horse started picking up speed he ended up running my head into the back of one of the Resch’s horses,” Helmeczi said. “By the time I came to, I just thought try to breath and get back under myself, knowing deep down it was likely that it was going to be pretty ugly.”

This isn’t the youngster’s first wreck.

“I knew that I have been through a lot worse after breaking my back which surprisingly calmed me a fair bit,” Helmeczi added.

“I knew that I just had to trust the two best pickup men in the business to do their job and get me out.”

The Resch brothers went on to become the first brothers to pick-up at that same CFR.