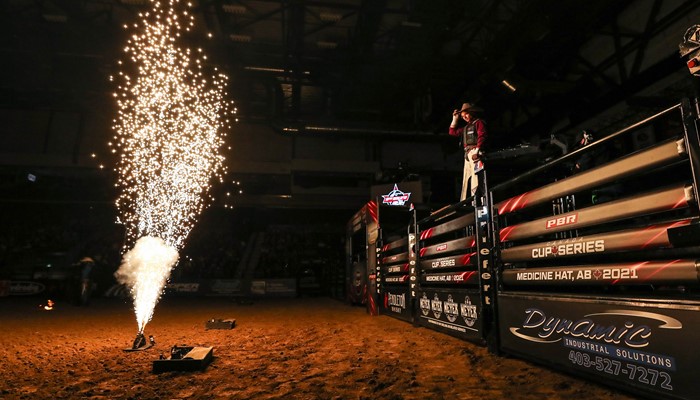 Nine-event season to once again conclude at the state-of-the-art Rogers Place in Edmonton, Alberta for the 2022 PBR Canada National Finals on Nov. 11-12

For the second consecutive season, the PBR Canada National Finals will be held in Edmonton, Alberta, at the state-of-the-art Rogers Place, again awarding a record-tying $175,000, including a $50,000 bonus to be presented to the 2022 PBR Canada Champion.

The elite Cup Series, presented by Wrangler, features Canada’s top bull riders, alongside some of the PBR’s top international athletes, squaring off against the rankest bucking bulls in North America. Fans will witness exhilarating 8-second rides and wrecks throughout the action-packed event as the PBR’s courageous riders face off against their 2,000-pound, animal-athlete opponents.

PBR Canada’s Cup Series is televised nationally on the TSN family of channels, bringing the heart-pounding action to fans across the nation.

In 2022, the Canadian Cup Series, presented by Wrangler, will begin on April 23 in Winnipeg, Manitoba, at Canada Life Centre. The tour stop marks the first time in three years that the Cup Series has held an event inside the home of the NHL’s Winnipeg Jets.

Following the event in Winnipeg, PBR Canada’s Cup Series, presented by Wrangler, will buck into Red Deer, Alberta, for the first time in history, travelling to the Peavey Mart Centrium on June 11.

The debut of the PBR Canada Cup Series in Red Deer follows two developmental Touring Pro Division events in the city in 2015 and 2016, both won by Garrett Green (Meeting Creek, Alberta).

The 2022 season will then continue with the Cup Series’ debuts in both Brandon, Manitoba, on June 18 at Keystone Centre, followed by the inaugural visit to Regina, Saskatchewan, and Brandt Centre on June 22.

Marking the first-ever mid-week PBR Canada Cup Series event, the 2022 PBR Regina Classic will be held in tandem with Canada’s Farm Show, scheduled for June 21-23. As one of the largest dryland farming shows in Canada, Canada’s Farm Show is one of the most important agricultural shows in North America that attracts a global audience.

The elite PBR Canada Cup Series, presented by Wrangler, was scheduled to travel to Regina in March 2020, however, the event was cancelled the day prior after the announcement of mass gathering restrictions due to the COVID-19 (coronavirus) pandemic.

The PBR Canada Cup Series, presented by Wrangler, will then hold three consecutive events in Alberta, making return trips to Lethbridge and ENMAX Centre on Sept. 23-24, Grande Prairie and Bonnetts Energy Centre on Sept. 30-Oct. 1, and Medicine Hat and Co-op Place on Oct. 15.

The regular season will then conclude in Saskatoon, Saskatchewan at SaskTel Centre for the second consecutive season, Oct. 29-30.

For the second time in league history, the PBR Canada National Finals will be held in Edmonton, Alberta, at Rogers Place. After a season-long battle, the 2022 PBR Canada Champion will be crowned following the two-day, season-culminating event on Nov. 11-12.

Fans can check with PBRCanada.com for tickets to all 2022 events as well as the season’s PBR Canada National Finals at the Rogers Place in Edmonton Nov. 11-12. For more information, stay tuned to PBRCanada.com and follow the tour on Facebook (PBR Canada), Twitter (@PBRCanada), and Instagram (@PBRCanada) for the latest results.