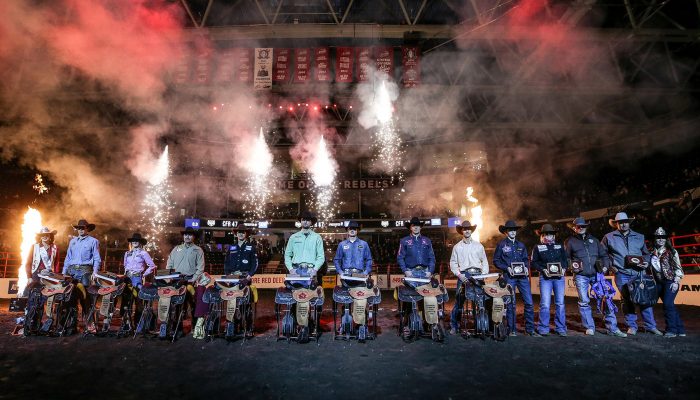 It was a fitting finale for the return of Professional Rodeo in Canada. After a 24 month absence, the Canadian Finals Rodeo returned to Red Deer’s Peavey Mart Centrium to ring down the curtain on the abbreviated 2021 season. It was a week filled with jubilation and heartbreak, and most of all drama, as the 2021 Canadian Champions were crowned on Sunday afternoon.

While there were a number of races that went down to the last ride or run, one event was decided before the afternoon action began. For Big Valley, Alberta superstar saddle bronc rider Zeke Thurston, Sunday afternoon’s final performance was a coronation. The king of Canadian saddle bronc riders posted an 85.5 score on C5 Rodeo’s Trump card for third in the round to go with two earlier round wins, two second place finishes and a previous third.

“Kicking it off with a go-round win at the start of the week got the ball rolling and you can ride that wave the rest of the week. Having that big a cushion (going into the final round) is darn nice but even if I didn’t, I’d go out there and do what I always do,” Thurston explained.

The two time World Champion and defending Canadian Champion earned 41,760 points at the CFR for a season total of 74,383. Thurston also claimed the aggregate title.

One of the most dramatic finishes came in the steer wrestling where five time Canadian Champion Cody Cassidy virtually had to win the round and move up a couple of places in the aggregate to claim a sixth win.

“Overall, I had good steers and got off to a good start,” Cassidy commented. “Saturday afternoon I had a steer I knew would be tricky to catch. Unfortunately I let him slip through my grasp but that’s part of it. I came back with two good steers after that. You can come here (to the Finals) five or six times and just because you’re here doesn’t mean you’ll have the opportunity to win it. You still have to draw good.”

And he explained how his approach has changed over the years, “I try to prepare myself more mentally than anything. I’ve started listening to sport psychology podcasts… as long as you’re prepared to rise to the occasion when the opportunity presents itself, you’re going to do good.”

Cassidy did what he had to and the stars aligned to give the Donalda, AB bull dogger an 8,000 point margin of victory. The six titles equal the Canadian record total established by Hall of Famer Bud Butterfield a half century ago.

The final ride of the 2021 Canadian Finals Rodeo provided one of the most thrilling moments of the entire week. Maple Creek, Saskatchewan bull rider Jared Parsonage who had earlier been declared All Around Champion of Canada mastered Outlaw Buckers’ Homegrown for 87 points to claim the aggregate and his first Canadian bull riding title.

“It was a tough set of bulls and the guys stepped up all week and made some good rides,” Parsonage commented. “I knew it was in my hands today. It’s simple – do a good

job riding him and the rest will take care of itself. I expected those guys to ride those good bulls but at the same time, I expected myself to do the same thing.”

Parsonage wasn’t the only two event winner at this Canadian Finals Rodeo. Though Sundre roper Riley Warren managed only a 10.6 in the final round of tie-down roping, adversity plagued a couple of the overall leaders heading into Sunday. And Warren emerged as the aggregate Champion and parlayed that to a 3000 point advantage over second place man Logan Bird to claim his first tie-down roping title. That result, coupled with a second place finish in the team roping, earned Warren his third High Point buckle as well.

In the ladies barrel racing, it was Justine Elliott’s day. The Lacombe, AB cowgirl, and her two time Barrel Horse of the Year, Blondy, despite not winning a go-round, maintained the consistent approach displayed throughout the week with a 14.262 sec run to place fourth on the final day. That consistency gave the three time CFR qualifier the aggregate title and a 13,000 point edge in the final standings to win her first Canadian title. Elliott’s closest rival in the see-saw battle that defined the week, Lynette Brodoway, though running first on the ground, hit a barrel which ended her opportunity for a title this year.

It came down to the wire in the bareback event on the final day of CFR. But it was six time CFR qualifier Clint Laye who came out on top to win his first Canadian title. Laye came into the final performance with the highest overall season earnings and sitting second in the lucrative aggregate. The veteran cowboy rode C5 Rodeo’s Black Feathers to 87 points and second spot in the round for a total of 44,751 points. Laye was able to hold off the hard-charging Ty Taypotat who was coming off back-to-back wins on Saturday but managed only an 83.75 to tie for sixth in the final round. But all that said, the margin of victory was less than 300 points between good friends Laye and Taypotat. The veteran Taypotat, who came into CFR in eleventh place, made a huge move and won the aggregate, but fell just short in his title quest.

The team roping championship for 2021 was split between Alberta and Saskatchewan as team roping header Valleyview cowboy Clay Ullery teamed with Waldeck, SK heeler Tyce McLeod for the win. The pair needed a final round 6.6 second fourth place finish to clinch both the aggregate and the Canadian Championship. The Sask team of Brady Chappel and Tee McLeod saw their title aspirations vanish with an unlucky no-time in the final round.

History was made at Westerner Park November 7 as the first ever ladies breakaway roping champion was determined after three rounds of action. It was the second generation cowgirl and National High School Champion, Kendal Pierson of Wardlow, AB who won all three rounds to secure the title in front of a large and appreciative Centrium crowd.

Both the CPRA and Westerner Park organizers were more than pleased with the attendance and the enthusiasm shown by fans and competitors alike as the CFR made a triumphant return.