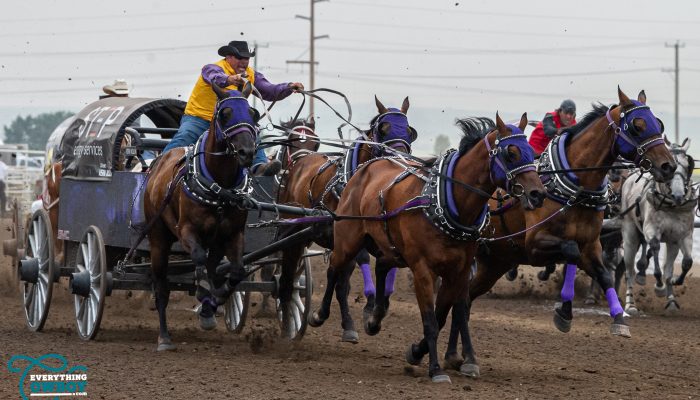 After a few days off the Battle of the Foothills resumed on Friday night for night number four. There was a lot on the line Friday night in High River, as it was the last chance for drivers to try to get into the top eight overall and qualify for “Semi-Final Saturday” and ultimately a spot in Sunday’s Championship final heat.

Kurt Bensmiller and his AIC Construction/Hard Knox Brewery Outfit, and along with outriders Rory Gervais, Dayton Sutherland and Hayden Motowylo, who topped the overall aggregate with a four-run total of 5:11.67. He will be joined in the semi-final round by Vern Nolin, Doug Irvine, Chanse Vigen, Evan Salmond, Layne MacGillivray, Dayton Sutherland and Chad Fike. Jordie Fike ended up in the crying hole, 9th place overall, and just missed the semi-final round by just 21 one-hundreds of a second, with Dustin Gorst filling out the top ten overall.

The top 4 times from the two semi-final heats on “Semi-Final Saturday” will qualify into the Championship final on Sunday where the winner will take home the 2021 Battle of the Foothills Championship.

As far as day results are concerned, it was Kurt Bensmiller who cashed the top cheque with his Hard Knox Brewery outfit after posting the fastest time of the week so far with a 1:16.21. Chanse Vigen placed second on the night; Chad Fike was third, with Layne MacGillivray and Dustin Gorst rounding out the top five on the night.