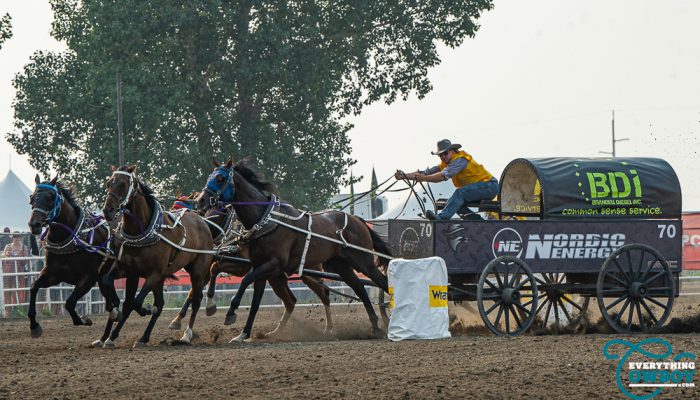 In a highly anticipated $30,000.00 Championship final heat at the Battle of the Foothills in High River. Chanse Vigen, Evan Salmond, Vern Nolin and Layne MacGillivray survived the semi-final round and would run for the championship at one of chuckwagon racing’s most prestigious events on the WPCA Pro Tour. On one of the most exciting race nights of the year, Chanse Vigen – driving the Mavericks Chuckwagon Team/Brandell Diesel Inc outfit, and along with outriders Rory Armstrong and Ryan McNeill collected the first-place winner’s cheque and the 2021 Battle of the Foothills Championship.

On the day results go, Chanse Vigen’s championship run also grabbed the day money after posting the fast time of the entire sheet with a 1:15.59 from barrel number four in the Championship Final Heat. Layne MacGillivray placed second, Kurt Bensmiller placing third, with Layne Flad and  Chad Fike filling out the top five on the night.