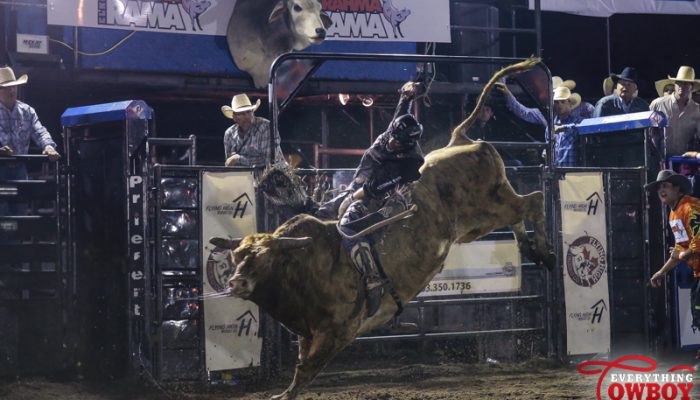 20 Years of the Elnora Brahma Rama

ELNORA, Alberta — It all began in 1998, when Lorne & Kelly High approached the Elnora Ag Society about hosting a bull riding in town. It was a hard sell but the Ag society agreed to put up $200 and the High family donated a Brahma cow to raffle off. The concept took off and the Elnora Brahma Rama was founded in 1999. They have seen many committee members and volunteers step up to help make this event possible year after year and are thankful for each and every one of them.

The Elnora Brahma Rama committee is incredibly proud to say that over the past 20 years they have been able to donate over $150,000 to many different local organizations and groups in our area as well as pay out over $150,000 to bull riders.

The Brahma Rama committee currently consists of only 13 members but between them they are able to create an event that brings roughly 2,000 people every year into a village with a population of less than 320 people.

Throughout the years, there have been motorbikes flying through the air, mini bronc riding, of course the new crowd favourite Wild Cow Milking and who could forget the time the lights went out in Elnora! But this year we are aiming to make it the biggest and best year yet! After all it’s not every day the Brahma Rama turns 20 years old!

The No. 2 man in Canada and the No. 44 man in the world finds himself in a pretty good spot heading in the second half of PBR competition. Cody has been riding great throughout this summer run and will be looking to continue the trend here. With 108.33 world points separating Covy from the No. 35 spot in the PBR World Standings a win in Elnora could take a big dent out of that. He is matched up with a bull from the Flying High crew. After some digging I wasn’t able to find much on this dude, but I know if Lorne has him in the draw he is a good one! Keep an eye on this matchup!

Wyatt Gleeson vs 346 I’m a Hellion

Wyatt finds himself just outside the Top 10 of the PBR Canada National standings at this point of the season. He has been having a pretty solid season all across the board and has been making some great rides along the way. Wyatt has drawn a bull from Slim Wilson called I’m a Hellion, who is unridden at the PBR Canada level. This bull has dispatched the likes of Lonnie West and Marcos Gloria, so Wyatt definitely has his work cut out for him. I’m putting my money on Wyatt to show up and get this dude twisted!

It’s really cool to see Nick coming into his own this season, his first full year in the pros has been treating him well so far. He is knocking on the door for a PBR Canada Rookie of the Year title and has all but punched his ticket to Saskatoon for the Finals. Nick has drawn into the R-Saga string in the first section tomorrow night, he’s matched up against Tangled. There isn’t much on this bull, but my pal Cody Floyd got on this sucker last season in Manor, SK and Tangled put up a huge bull score. So, if Nick shows up with his riding pants on and does his job we could see some huge points here!

I’m happy to see Justin back on this side of the pond hitting the trail, he has spent some time over here a couple of years ago and had some success. Justin is a big, tall, lanky Aussie who knows how to ride the bad ones. In my opinion, he could not have picked a better one himself here, Kool Aid also comes from Andy Robertson and the R-Saga team down there in Manor. This little bull has been out quite a few times this season, and when guys connect with him we see some big-time scores. Aaron Roy actually rode this bull for 88 points last month in Manor to take the event win. If everything lines up on Saturday we could see the same sort of outcome here!