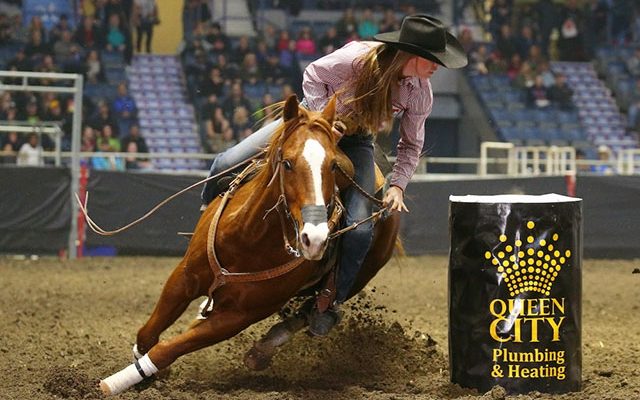 AIRDRIE, AB — Regina’s Canadian Western Agribition Rodeo returned to its professional rodeo home for the first time in over a decade and the move was greeted by huge crowds and excited competitors.

No one was more excited than Pouce Coupe, BC cowgirl Chelsea Moore who dominated the barrel racing leaderboard and the pay window in her event.

“It’s a relief for sure to get the season off to this kind of start,” Moore smiled after the Regina, Saskatchewan win. The 27 year-old trainer/contestant comes from a rodeo family. Brother Clayton Moore, was the 2013 Steer Wrestling champion of Canada and cousin Timber, who makes his home in Aubrey, Texas, won the Canadian Tie Down Roping title that same year.

But for Chelsea, the last two years have been a bit of a struggle. “We really didn’t get it going until August of both of those years. The first year my horse was green and it just took some seasoning to get him really working. Then this year we had a few injury things going on so again it was tough in July and August. Then he was really awesome for the last couple of months of the season but it was too late to make the CFR. That’s why having a start like this really takes the pressure off. As one of my friends texted me – you’re halfway to Edmonton.”

Moore posted a first, a second and won the average, collecting a whopping $6,615 (unofficially) at the lucrative kickoff event for the 2017 Canadian pro rodeo season. The BC domination of the barrel racing saw fellow competitors – Savona’s Sarah Gerard finish second at $5,264, with three times CFR qualifier Katie Garthwaite of Merritt capturing third spot for $,4013.

Moore spoke glowingly of the effort by event organizers. “I was very impressed with the production, with the ground and especially the way we were treated there.  It was just a great rodeo and a lot of fun.”

Some of that fun came on the back of her ten year-old sorrel gelding, Badger, (Badger’s First Play) a cutting bred horse, sired by Reys Dual Badger out of Play Shorty Play by Shorty Lena – that her grandfather had been urging her to start training for barrel racing for two years. “I kept telling him I didn’t really want to ride the horse but one day he brought Badger to the house and said ‘just ride him’. So I finally did and there’s been no looking back. I think from now on I’ll listen when Grandpa tells me about a horse.”

Two time Canadian Bull Riding champion, Dakota Buttar, saw his bid for three titles in a row come up short at the recently completed CFR. The Kindersley, Saskatchewan native bounced back with authority at the four day Agribition rodeo finishing second in the first round and splitting first in the other to give him the average win as well and a $6,010 kickstart to the 2017 season.

When Cody Cassidy laid claim to his fifth Canadian steer Wrestling championship just two weeks ago, he made it clear that he hoped to win a few more. The Donalda, Alberta dogger wasted no time in taking a major step in that direction by winning the Regina event in commanding fashion and collecting $5,255 in returning to his customary spot atop the Canadian standings.

Next up on the roster for pro rodeo athletes and stock is the Wrangler NFR – which runs December 1 to 10 in Las Vegas, Nevada. Watch for daily results, highlights and releases at rodeocanada.com