“They have to be nice to us old guys every once in a while,” contended the 38 year-old. “They give me the best horse in the pen and if I don’t screw it up too bad, they give me a cheque. It makes me think I’m riding good enough so I don’t retire.”

Bowers’ draw at the 61st annual Lea Park Rodeo, north of Marwayne, AB, on Sunday afternoon was the Calgary Stampede’s Shadow Warrior, a 9 year-old stallion sired by the firm’s legendary, Grated Coconut. The result – an 84.5-point score, good enough for a split of top money with Montana’s George Gillespie IV at the second stop of the 2015 Wrangler Canadian Professional Rodeo Tour. 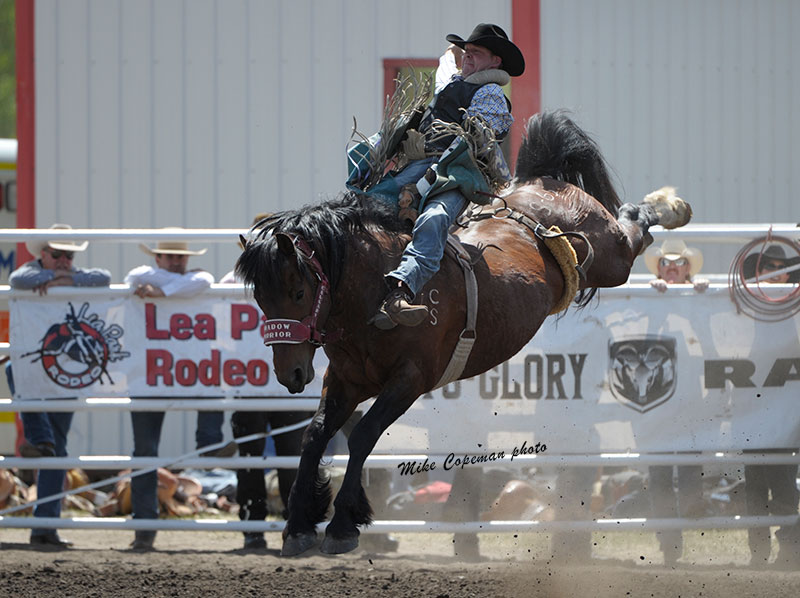 “I love getting on that horse,” offered the 13-time Canadian Finals Rodeo qualifier. “If you do things pretty close to right, you’re going to win first. He’s an awesome horse and was no exception today.”

It wasn’t Bowers’ best ride of the weekend, however. He also grabbed the first place cheque at the Rocky Pro Rodeo in Rocky Mountain House, AB, with an 87-point trip Saturday on Outlaw Buckers’ Open Range. A third cheque from the Kinsmen Pro Rodeo in Brooks, AB, helped put together a $4,377 weekend for the 17-year pro.

“In this sport, one day you can be on top and the next day you’re in the dirt,” said Bowers. “I have to work twice as hard as these kids to get half as much. But as long as I have the motivation, I’ll keep going. I’m not making any retirement plans.”

2013 world champion tie-down roper, Shane Hanchey is making the best of his time on this side of the border. The Louisiana cowboy placed at all three rodeos this past weekend to earn $4,180. He’s now earned cheques at five of the six Canadian spring rodeos he’s entered.

“This horse of Logan Bird’s, TJ, is just a solid winner,” boasted Hanchey of his mount used to win over eight thousand dollars in Canada so far this season. “It’s probably the best horse up here along with Curtis Cassidy’s Stick. Clint (Robinson) and I have both been riding him and the only rodeo we haven’t placed at was Grande Prairie.”

The early success has Hanchey poised for a return to the CFR for the first time since 2012, the year he won his only Canadian championship.

“By coming to these six rodeos, by the time we get to Ponoka and Williams Lake, we’ll be at about 12 or 13 and then we can get our count in,” calculated Hanchey, who needs to get to a minimum of 15 Canadian rodeos to qualify for the Canadian Finals Rodeo. “The CFR’s been great to me. I’m looking forward to hopefully coming back and winning another title.”

Robinson, meantime, won $4,119 as he too picked up cheques at all three weekend stops. That included a split of third in Rocky Mountain House with Hanchey and a split of first in Brooks.

Baillie Milan is off to one of the best starts in his career. The Cochrane, AB cowboy added $2,633 to his 2015 steer wrestling total by winning the two-head aggregate at Lea Park with a total time of 8.8 seconds. He then helped out his brother, Tanner in the team roping.

“We only entered here because he needs to get some cheques to qualify for the Hi-Point,” suggested Milan, shortly after the pair put together a 5.4-second run in the first go-round on Friday night to win $1,015 each. “I bet if he gets another cheque, he’ll quit the team roping. But if I keep winning, I might have to call him to help me get into that Hi-Point deal.”

Next up on the Pro Rodeo Canada schedule is the Daines Ranch Rodeo at Innisfail, AB (June 12-14).

About Pro Rodeo Canada: With its headquarters in Airdrie, Alberta, Pro Rodeo Canada is the sanctioning body for professional rodeo in Canada. Pro Rodeo Canada endorses over 50 events annually with a total payout exceeding $5.1 million. Join us for the 42nd edition of the Canadian Finals Rodeo (CFR) November 11th-15th, 2015 in Edmonton, Alberta at Rexall Place, our association’s premiere event. For more information please visitRodeoCanada.com or call (403) 945-0903. Follow us on Twitter, or like our page on Facebook, and watch the action on YouTube throughout the year.