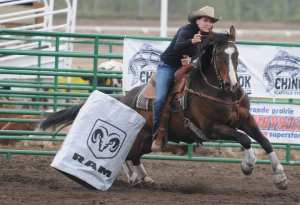 Mellisa Hollingsworth and Rascal wobble the last barrel but it stays upright for a clean ride. Hollingsworth, who won the bronze medal in skeleton for Canada at the 2010 Olympic Games in Vancouver, made her pro rodeo debut in Grande Prairie

On a cold day in Grande Prairie, Canadian Olympian Mellisa Hollingsworth made her professional debut.

However, watching her pound across a muddy cloverleaf course on a horse was a far cry from the sleek, icy skeleton track she raced down at the Vancouver Olympic Games.

On Wednesday, Olympic bronze medal winner Hollingsworth and her horse, Rascal, charged out of the gate in the barrel-racing event at the Grande Prairie Stompede – her first-ever entry into a pro rodeo event.

Despite finishing well back of the leader, with a time of 17.62 seconds, Hollingsworth’s wide grin screamed this was an experience to be repeated.

“I’m still craving this and want to be here and do this,” said Hollingsworth, amidst the sound of horses and riders gathered around the barrel-racing track. “It didn’t go the way that I wanted it to, so you pick on yourself and there’s things you could have done better and that’s the competitor in me.

“But actually I’m pretty happy because the things that had gone wrong on my run, I was aware of what was happening, I wasn’t just along for the ride, and I was correcting things.”

While Rascal, an 11-year-old quarter horse, never reached the same 100-plus kilometre per hour speeds Hollingsworth achieves on her skeleton sled, she said the feeling of racing around the barrels was the same as flying down the skeleton track.

“You get the feeling that as you’re about the start your run there’s like this huge cushion that just releases,” she said. “It’s just like this is what you’ve trained for… and you allow yourself to get lost in the moment and do your job.

“When you’re standing at the top of the track, you’re committed, you’re on your sled and you’re flying down and it’s exciting because there’s that element of danger there. I don’t think there’s so much that element of danger in (barrel racing), so what attracts me to it is that you are trying to attain a certain goal, there is a pattern, there is speed, and you want to have that feeling.”

Hollingsworth said the similarities between the two sports extend beyond the rush and into execution.

The biggest difference, Hollingsworth joked, was that Rascal has brakes.

Hollingsworth’s professional venture into barrel racing hasn’t been a long time coming. In fact, the 30-year-old Olympian only bought her professional ticket earlier this year.

She made the purchase after attending a riding clinic run by Dee Butterfield, a former Canadian champion in barrel racing and a well-known barrel racing clinician with over 40 years of experience.

But the rodeo life is one she’s been familiar with her whole life; one that she was raised on at her family’s ranch in Eckville, Alberta.

“We always had horses and I would do junior rodeos and amateur rodeos when I was little,” Hollingsworth said.

However, when it came time to leave to focus on skeleton, Hollingsworth had to sell her horse to buy a car to get to Calgary.

“I have always joked that it didn’t get me to Calgary fast enough when I needed to slide skeleton,” she said. “But that’s just what my focus was in, I was involved in provincial ball and skeleton. Now I’m just working so hard to get back to my roots and I feel very fortunate that I have this opportunity.”

Helping her on this journey is Brook Robertson, the daughter of Butterfield and a barrel horse trainer and racer. Robertson and Hollingsworth met about seven years ago and it was Robertson that helped her pursue barrel racing professionally.

It’s Hollingsworth’s attention to training and pressure that Robertson said will help her the most in barrel racing.

“She was very focused (at the clinic),” Robertson said. “You can tell when you’re watching someone on a horse, whether they are just riding or whether they are training, and she was training herself and her horse.”

The Grande Prairie Stompede marks the first stop in a very busy summer for Hollingsworth and Robertson. The pair will be competing in nine rodeos before July 1, including the rodeo this Friday in Bonnyville.

All this sandwiched between her off-season training for skeleton and her ultimate goal of competing as part of Team Canada at the 2014 Olympic Games in Sochi, Russia.

“I feel I have some unfinished business,” Hollingsworth said simply, the emotion behind those words carrying their message loud and clear. As much as she is enjoying barrel racing, her determination to compete in the next Olympics flared in her eyes as she spoke.

Hollingsworth said the Canadian Olympic Committee hasn’t been supportive of her barrel racing, but they haven’t prohibited her from it.

“They have always known I’ve rode and I have been warned,” she said. “But I’ve just decided that it’s something that I need to do for me and my heart therapy, and I’ll take the risk (that I might get hurt). It’s important for me that I’m happy, I’ll compete better on my skeleton sled if I’m happy than if I’m not.”