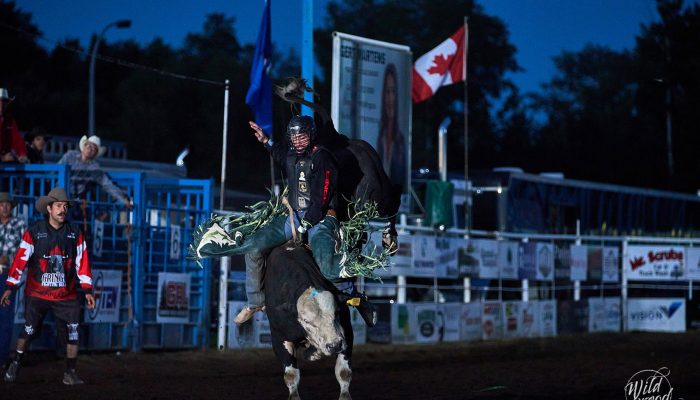 For 2016 Canadian Bull Riding Champion, Jordan Hansen, it was a lot of miles, book-ended by the smile of a winner. The journey began with Hansen’s win at La Crete, Alberta’s Field of Dreams Stampede where his 86.5 point ride on Outlaw Buckers’ Alberta Premium garnered the Amisk, Alberta cowboy a $1647 payday.

Then Hansen and travelling buddy (reigning Canadian Champion) Jared Parsonage headed back across the border to the U.S.

“We’ve been spending the majority of our time down south,” Hansen noted, “but this time I kind of got skunked.” This led to the next leg of the trek – an overnight drive from Omak, Washington to Dawson Creek, B.C. for the 100th Dawson Creek Exhibition and Stampede and a meeting with Duane Kesler Championship Rodeo’s Ivy League. “He’s a pressure bull,” Hansen grinned. “I find I pressure up more on bulls like him that everybody is supposed to ride than the ones nobody rides. I was glad it worked out.”

The two wins on Canadian soil, made even sweeter by the fact that the Dawson Creek event is part of the SMS Equipment Pro Tour, have the 2017 National Finals Rodeo qualifier confident heading into the regular season’s stretch run and a possible return to Las Vegas in December.

“There’s a lot of really good rodeos coming up, and it just takes one good weekend to put you into the mix, so I definitely have a really good chance.” The twin Canadian successes will move Hansen to within $13,000 of that sought after date with the bright lights of Vegas and to third place in the Canadian standings.

Season leader Jared Parsonage, who was third at La Crete and split 2-3 in Dawson ($3563) sits in 15th spot in the World as of this writing and like his travelling partner, is a genuine threat to put in an NFR appearance of his own.

For another Jordyn – different spelling – same result, it was a first ever pro win. Jordyn Tressider, from Cochrane, Alberta, topped the field in the barrel racing with a 15.39 second run at Dawson Creek, good for a $2914 cash injection that puts the rookie very much in the CFR conversation.

This week will see CPRA rodeo athletes stay further south as they travel to Pincher Creek Pro Rodeo in southern Alberta and Cranbrook Rodeo in southern B.C. Both events run August 19-21 and are part of the Maple Leaf Circuit.