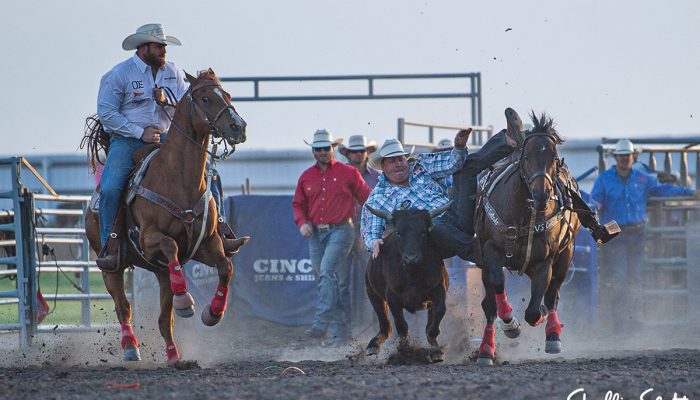 Another weekend. Another success story for Curtis Cassidy. The man who has 12 Canadian titles and 21 CFR appearances in steer wrestling on his resume was at his best once again with a 3.9 second run at Hand Hills Lake Stampede for a $1302 payday and added another $1924 to his weekend haul with a 5.0 winning run at Bonnyville Pro Rodeo.

“The drawing Gods have been on my side so far,” the Donalda two-event cowboy chuckled. “I had the perfect draw at Hand Hills, just an excellent handling steer. He took a step away from me but Cody (Cassidy), Curtis’ brother and hazer, brought him back to me. Then at Bonnyville, I had one of the better ones in a herd of fresh, bigger steers. Matt Richardson was 5.3 on him and I made pretty much an identical run to Matt’s. The steer braced up just a little on me and kind of hung a bit or I could have been a short four.”

For the second-generation superstar, it’s been business as usual in 2022 and the weekend’s wins increased his lead at the top of the Canadian standings. Cassidy is happy with his fast start. “I’ve been on both ends of it and being first is a lot nicer than being way back in the standings at this point in the season for sure. You’d like to have the CFR made as early as possible.”

“Tyson doesn’t have as many accolades as Willy with his four gold buckles but the thing with Tyson is he’s just so user-friendly,” Cassidy noted. “Anybody can get on him and have a chance to win. He does his job better than any of us do.”

Cassidy acknowledged that having a horse like Tyson is helping to extend what has already been a remarkable career. “In this sport every January 1 you start over. I’m still healthy, I’ve got Tyson and I’m traveling with some younger guys. With COVID behind us and a lot of the bigger summer rodeos back, I’m hoping to have a year that gets me back to the CFR and the NFR.”

It was a pair of team ropers who were the top money winners on the three-event weekend. Veteran Cardston heeler, Riley Wilson, and his heading partner, Grady Quam, collected wins at both Bonnyville (4.5 seconds, $1874) and Hand Hills (5.6 seconds, $1437) and added a fifth-place cheque at Leduc Black Gold Rodeo (4.9 seconds, $948) for a total of $4260. The pair also made the biggest move in the early season standings, vaulting from 22ndto a spot solidly in the top ten.