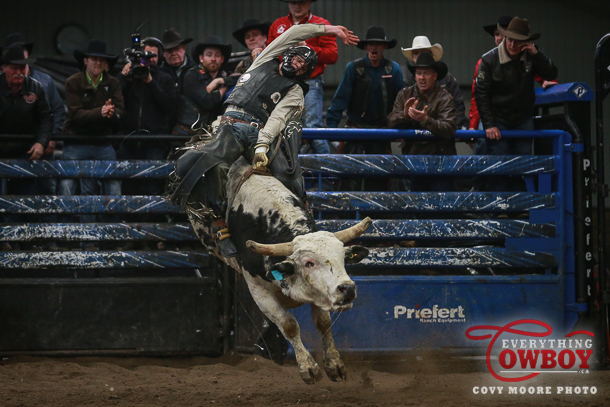 Brock Radford was the only man to make the full eight during the short go, in what could be considered the best eliminator pen brought to an event in recent memory.

Riding Outlaw Buckers’ Big Rig to an 86 score in the long go round, good enough for second underneath of a mammoth ride by 2015 Canadian Championship runner up Zane Lambert, he was one of only nine qualified rides. 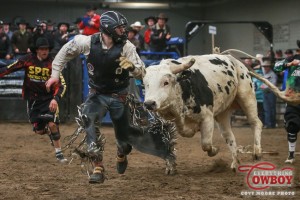 Brock Radford gets chased down by Girletz’s Freakazoid after his 87 point ride in the short go at the 2016 Chad Besplug Invitational.

“I was really excited to see that draw. He is a good bull of Curtis Sawyer’s. I was set to do my job and ride two, and I got it done,” Brockford told Everything Cowboy.

The short-go pen was jam packed with talent, and it was no exception for Radford who took on Girletz’s bull, Freakazoid. The third year professional cowboy saw the same bull at last year’s Ranchmans’ Renegades PBR Bull Bustin’, but was jerked down into the well.

“I got on him at Ranchmans last year. He made two rounds to the right with me, and he yanked me down into the well,” Radford said.

“I knew (tonight) was going to be good.” 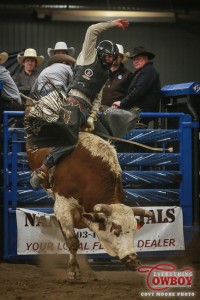 Radford, who is close friends with Chad Besplug, admitted he was a part of the team who put together the short-go pen, adding that this group of bulls is something that could easily be seen at a finals under any sanctioning body.

“I was one of the few guys who helped Chad (Besplug) put this pen together. This is a CFR calibre, PBR Canada calibre pen. These are the best bulls in Canada. Chad wouldn’t want it any other way at his event. Chad wants the best guys and the best bulls and that it was we made it. We knew the bulls we put together would be tough. All it takes is the right guys drawing the right bulls and really stepping up to the plate and making great rides, it was a great event overall,” Radford said.

“It’s a good start to the season, just got to keep it rolling from here. This is dang near a hometown rodeo for me I have a bunch of family and friends here, so it is great to get the win. It feels great to win (Chad’s) bullriding.”

Next up for Radford is two nights in Lethbridge for this coming weekend’s PBR event being held at the Enmax Centre.