INNISFAIL, Alberta — June is the right month for pro rodeo competitors to break into the win column and build momentum. The Innisfail Pro Rodeo provided that opportunity for some up and comers in Canada, while a brand new event on the schedule provided a significant boost to the team roping world this past weekend.

“I hope he’ll be proud of that one, and I hope it’s a good Father’s Day gift for sure,” said Lacasse. “Dad still follows the game pretty good, and knew that horse. He told me to bear down today. We talk every day. He’s my best friend. Every ride I get on, I send him the video and he’s my coach, even if he’s out east.”

Lacasse had been anticipating the matchup ever since he’d since seen the draw.

“My travelling partner Pascal (Isabelle) got on him in the short round in Strathmore last year. I’d always seen that horse, and he’s the real deal, so I was pretty excited.”

“He’s exactly what I expected. He’s a strong bucker right out of there, but he’s under you, and gives you the opportunity to do good.”

“I started good. He really hits you in the back, and I kind of got a little behind, but I just kept gassin’ it ‘till the whistle!”

Lacasse tore his bicep last November and didn’t return to action until Stavely this May. So he’s relieved to find it feeling strong now, and the $900 from Innisfail will help toward his goal of qualifying for a first CFR, after spectating last year.

“I was sitting in the stands because I went to cheer on Pascal last year. I promised myself – that ain’t going to happen again. I definitely want to make it there for sure.” 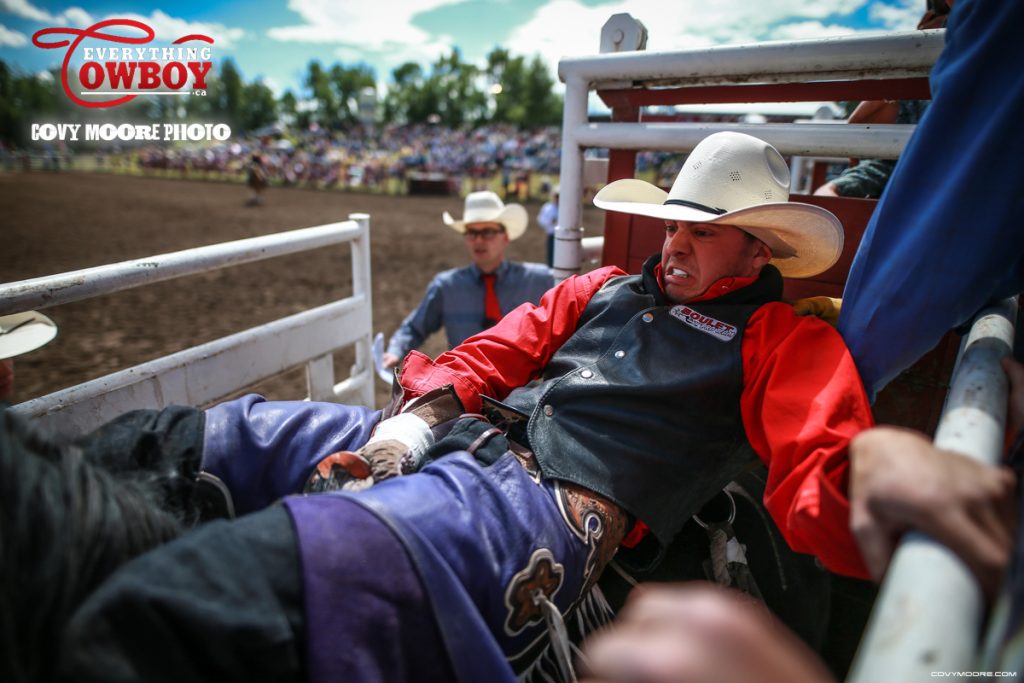 Spur Lacasse leaves the chute in Innisfail on Special Delivery from the Calgary Stampede. Photo: CovyMoore.com

The Daines Ranch was a bit of a gold mine for steer wrestler Harley Cole. He rolled in from Calgary to collect some $2,600 at the Twist ‘Em Twice jackpot before the rodeo started. Then he parlayed that success into a winning 3.7 second run in the real rodeo, for a $1,903 boost to his record in the standings. Cole credits the return of the Milan brother’s horse, Boozer, for his improved fortunes.

Horsepower also got props from one of the winning tie-down ropers at Innisfail. Blair Smith of Wimborne is finding new confidence in a horse his brother Shane seasoned last year at college. Smith and Erik Dublanko of Thorsby picked up $1,698 each for their 8.4 second runs.

Another weekend, another win for the World Champ. Zeke Thurston climbed on board Calgary’s Shoshone Mountain for 82.5, to claim first in the saddle bronc riding, the Contway bronze award, and $1,036. Bull riding was shared by a trio of riders who made 85.5 point rides. That included Tyler Pankewitz of Ponoka, Travis Warburton from Sundre and Idaho’s Garrett Smith.

One of the biggest money winners at Innisfail didn’t have to travel far from home. Diane Skocdopole, of Big Valley, was the only barrel racer in a large field of talent to break the 16 second barrier, rounding the cloverleaf pattern in 15.910. Skocodpole, who filled her pro permit in Camrose, runs an eight-year-old mare named Sonic she got as a foal, in a rope horse deal her husband Dale made in Nebraska. She’s a handy horse around the family ranch, and Skocdopole says she’s a very versatile horse.

“She really loves to rope calves and head (steers). It’s always a battle whose trailer she goes in,” laughs Skocdopole, about whether she or Dale get to take the reins. But with the Innisfail win, give Diane the edge in the discussions now.

Another Skocdopole was on top of the leaderboard all rodeo long. Luke Skocdopole, Dianne’s nephew, partnered up with Kyle Lucas to claim the team roping honors in just 5.1 seconds, for an $1,838 payday each.

But the big buzz in team roping was from the Big E Round Up in Okotoks, the first team roping special event to be sanctioned by the CPRA. With a $10,000 added purse, it attracted 49 teams from across North America. The first round, and $2,000, went to brothers Brady and Riley Minor of Washington, for a time of five flat. The second round went to another brother combo, Brett and Justin McCarroll of Camrose, for a 4.6. World champions Levi Simpson and Jeremy Buhler took the short round with a 4.9 second run, for $1,500. But coming out on top in the average was the million-dollar heeler, veteran Walt Woodard, now of Stephenville, TX, and his AZ based partner, Matt Sherwood. They placed in both go-rounds, to sweep up a whopping total of $11,133, making their June time in Canada worthwhile. The Minors were second overall for another $7,290, with Simpson and Buhler adding $5,103 to their pockets for fourth in the average. Riley Warren and Stacy Cornet collected $6,196 for third place overall.

Also at Reno, Curtis Cassidy was leading the first round and sitting second on two head with 9.7 seconds. Roper Logan Hofer was placing in the first round, while bronc rider Jake Watson was on top for Round 2 with an 86.5.

In Belt, MT, Scott Guenthner won $1608 for first place in the steer wrestling with a 3.8 second run, giving him the biggest bump in the PRCA standings this week. He’s now up to tenth for the world. The eldest of the Thurston gang, Wyatt Thurston, took the bronc riding with a 77, for $1086. Roper Erik Dublanko was third, for $826, and barrel racer Melissa Thiessen split sixth place.

Five Canadians are inside the top 15 in the PRCA’s World Standings this week including Guenthner, Zeke Thurston, Clay Elliott, Levi Simpson and Jeremy Buhler.

The first Pro Tour stop on the Canadian rodeo line-up highlights a busy June weekend on the calendar. The Wainwright Stampede features four performance and a Sunday 6:30 pm Finals. It’s also a two-header before the finals for tie-down and team roping, as well as steer wrestling. As well, Guy Weadick Days return to High River, with three pro rodeo performances. Sundre Pro Rodeo has a double header Saturday, for four performances throughout the weekend.

PRCA QUOTE OF THE WEEK
“What we do here is celebrate the heritage tradition of Alberta in the rodeo sense. It’s a cowboy’s rodeo and we’ve always kept it that way.”
– Ponoka Stampede president Blair Vold said to the ProRodeo Sports News about the upcoming Ponoka (Alberta) Stampede, June 27-July 3.

Thank you to our sponsor, Boulet Boots Inc, presenter of the Boulet Boots Pro Rodeo Report on Everything Cowboy.

About Boulet Boots Inc: What began as the St-Tite Shoe Co. Ltd in 1933, manufacturing dress shoes turned into over 200 pairs of shoes and boots per day for the Canadian Army during World War II. In 1964, Robert, Roger and Reynald Boulet, sons of founder G.A. Boulet, began manufacturing western boots, therefore being first company to do so on Canadian soil. In 1967 the three brother founded the Festival Western St-Tite which fame now crosses international borders. Today, Boulet Boots Inc. operates as a fourth generation, Canadian producer of handcrafted boots. For more, Like Boulet Boots on Facebook or visit www.BouletBoots.com