The Cloverdale Finals is today at 2pm head out to see Ty there today. I bet he will do well and take home a big check. You can also watch the rodeo online if you can’t be present. Check it out, it will be good! This story is from a local paper here around Surrey that has been following his career. 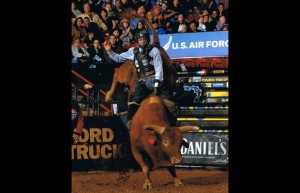 Ty Pozzobon was seven years old when he first got bucked off the back of a steer and decided he wanted to get back on again.

It was the first sign he had bull riding in his blood, nerves of steel and an iron grip.

That, plus a love of animals and adrenalin, are what it takes to be a rodeo star.

Now 19, Pozzobon is ranked among the top 40 bull riders in the world and ranked forth in Canada. He’ll be the only B.C. bull rider competing at the Cloverdale Rodeo this weekend, and one of only three B.C. residents to qualify for the prestigous rodeo.

Pozzobon rode his first animal as a grade-schooler when his father, a former pro bull rider, let him try out a steer on their ranch. He didn’t last long before he was flung, but seconds were all it took to get hooked.

“I knew I loved it as soon as I tried it. It’s the adrenaline rush,” he explained.

He grabbed a hold of his first bull at age 14.

“It’s quite a step up. Steers weigh about 800 pounds and most bulls average from 1,500 to 2,000 pounds. I wasn’t scared, but I was nervous. When you get thrown off of a steer you don’t have to worry about them chasing you. But when you get off a bull you have to get right out of the arena because most of the time they are going to come after you.”

Pozzobon avoided an accident on that first bull, but wasn’t so lucky a year later at a high school competition when he got into his first big “wreck,” as bull riding accidents are known. They’re inevitable in a sport where men ride ornery beasts with names like Nightshade, Kick Butt, Perfect Poison and Bible Bender.

“It was probably the biggest bull I had ever been on and I was 15 years old and weighed like 100 pounds. I was trying to hold on and he threw me off in front of him and then he came and stuck a horn under my vest and threw me up in the air and then over the fence, right in front of the ambulance,” Pozzobon recalled.

“It opened my eyes that this is the real deal: I’m going to have to deal with this if I am going to keep up with the sport.”

After a wreck where he smashed his nose, Pozzobon decided to wear a helmet for rides. It’s a relief to his mom, he says, who sometimes watches him compete with her eyes closed. But rodeo runs in his family: his uncle was also a bull rider and his 15-year-old sister, Amy, is a ladies barrel racer.

In 2008, he was the B.C. Highschool Rodeo Champion and after graduating from Merrit Secondary, he won a full bull riding scholarship — yes, they have them — to Odessa College in Texas, where he’s studying welding. After his first year, he took a leave to go pro and has been touring the U.S. and Canada for two years, chalking up impressive honours.

In the Canadian Professional Rodeo Association season, he came in second overall. Last year, he was named the CPRA’s Rookie of the Year and just this past March was invited to what he calls the “NHL of Rodeo” the Ford Built Tough Series, which he’s since appeared in six times. He’s also qualified to compete at the Calgary Stampede this year.

In April, he completed his best ride ever on a bull named Toy Soldier in an Idaho rodeo: a 92.5-point ride. Rides are scored out of 100, with judges weighing both the toughness of the bull and the rider’s ability. Riders have to stay on for eight seconds, hold one hand away from their body and the bull, and maintain good form.

“It doesn’t sound like much,” Pozzobon says of the eight-second ride, “but it’s the longest eight seconds of a guy’s life sometimes.”

Despite his thrill-seeking career, he seems like a well-grounded guy: his mom is his manager and his website makes it clear he’s still a typical teenager: his bio lists his birthdate, height and weight, as well as his relationship status (he’s single, ladies).

Pozzobon hopes his success can inspire another youngster who may look up to him the way he looked up to Justin McBride and Ty Murray growing up.

“Kids might look up to me and see if some guy from B.C. can make it to the Built Ford Tough Series then why can’t they. I think B.C. is lacking bullriders and I think it’s kind of cool to give other kids hope.”

Pozzobon is competing against some of his own childhood heroes at Cloverdale, where he will ride Friday night and Saturday afternoon.