Las Vegas, NV: The PBR World Finals is coming up here starting next Wednesday October 26th from the Thomas & Mack Center on the UNLV Campus in Las Vegas, NV. Four Canadian bulls have been chosen to compete along side the bull riders at the World Finals which runs from the 26th to 30th. This is part 1 of 4 in my series on the stories of the 4 bulls from Canada heading to this years PBR World Finals.

I had a chance to catch up with Justin Volz on my way down here this weekend and ask him about Gas Tank. I recorded the phone call and some things I have written and names may not be correct and I apologize for that in advance. If I did mess up please let me know through a comment below and I’ll get it fixed as soon as I can!

Justin told me about Gas Tank though and that he was a 4 year old dark red brindle bull they raised at home. When I asked him what he was out of Justin told me “He’s out of a full brother to Jeff Robinson’s (Formerly Todd Braitwaite’s) 404 Gunpowder & Lead and a Little Bull Creep Cow.”

I thought that was a bit off an odd combination but it sure is a winning one. Wild Hoggs bulls Freckles and 667 Ulterra’s Torkbuster are out of the same line of breeding.

With how much I travelled this year I didn’t get to see Gas Tank very much so I asked Justin about what he’s usually like and he said “He’s been a really good bull all year he’s slowly been getting better but is usually out there and around to the right.”

If you are able to be friends with Wild Hoggs Bucking Bulls or “Like” Everything Cowboy on Facebook you can see Gas Tank doing exactly what Justin told me in a couple videos throwing off some of Canada’s top Bull Riders.

Gas Tank hasn’t been ridden all year in competition. He was rode one time in the practice pen back in the winter but hasn’t been since.

Trevor and Amber Williams are Co-Owners of Gas Tank as well. But he will be bucked under Wild Hoggs and Jeff Robinson at next week’s finals.

As for whose involved with Wild Hoggs, here is the list of all those that are part of the company: (Again I apologize for the spelling if I am wrong.)

When asked about how he feels about having Gas Tank go to the PBR World Finals Justin replied with “I’m really happy with it, I hope we can get at least one to go every year.” 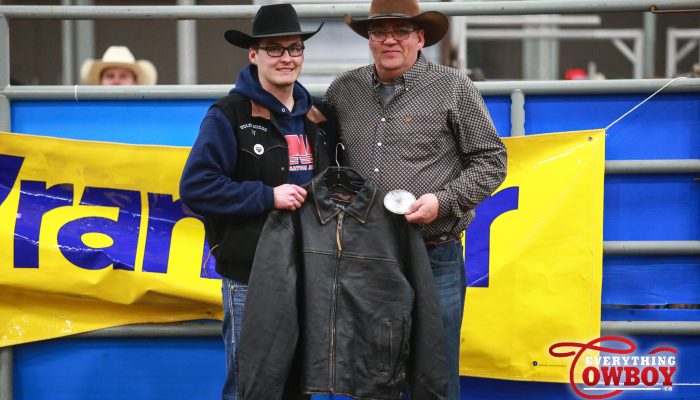 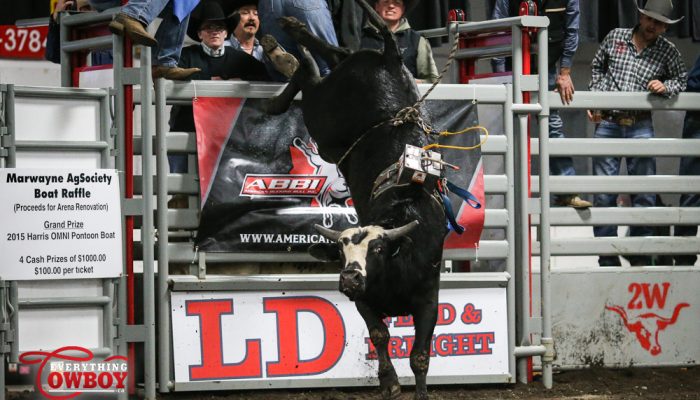