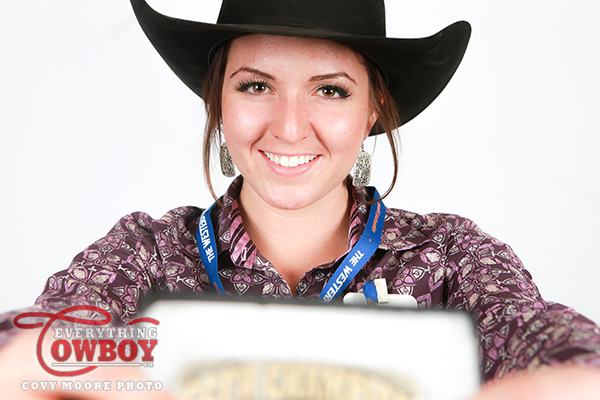 After a wildly successful season last year scoring a goat tying title in her first finals appearance, Rayel Daines translated a dominating season into another dominating finals and her second consecutive title.

Three straight wins, with times of 7.1, 7.4 and 8.1 blitzed the field. The Innisfail native said that her desire to hit that six second mark helped propel her to this year’s title.

“All year I have had a goal in mind and that was to run a 6 second run in the goats. If I’m being honest that was my only thought going into finals,” she told Everything Cowboy.

“I know that I have all the muscle memory I need, so it was a matter of pushing myself to hustle through those movements. The first two runs I knew I drew good goats so I was going for that 6. I almost had it the first day with a 7.1 and a small bobble cost me it on the Friday night performance. Coming in each night I was mostly just excited. It’s an adrenaline event so staying focused is the hard part. People tell me that I’m pretty intense before my events, but that’s how I keep my head in the game, and all negative thoughts away.”

Anyone who knows rodeo knows that this is a two player game, and Daines horses Scuff (Goats) and Charlie (Breakaway) are just as much champions as she is. 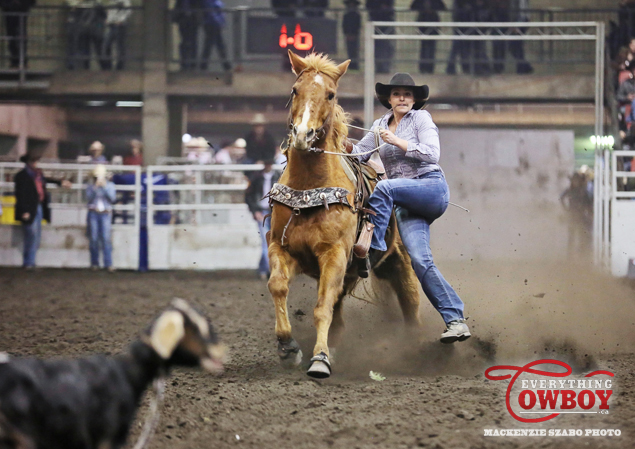 Rayel Daines competes with her horse Scuff during the Goat Tying event at the 2016 CIRA Finals in Edmonton, Alberta. (Photo courtesy Mackenzie Szabo)

“Scuff I have been competing on from the beginning in the roping. But this was his first year being used for goats. I also headed on him at a few of the rodeos this spring,” she said.

“This was Charlie’s first full year on the rodeo trail. He did so good all year and I am very excited to see what is in store for him. He is one athletic little dude, with a lot of try. I trained him myself in the breakaway so it was a huge accomplishment to win season leader on him.”

As for her future in rodeo, Daines said she is hoping to continue on with some team roping in the future, but will be putting some extra focus into coaching in goat tying and giving the CIRA Finals a go next year, except this time on the board helping promote the event.

“Moving forward I would like to coach and help other girls wanting to get into the goat tying game. I put a clinic on in January and it was extremely rewarding. Something I will definatly be doing again.  I have also accepted a position as one of the CIRA finals coordinators for next year. Being in school, working and rodeoing can be very stressful at times, but as of this moment I do plan on coming back for one last year. I plan to get more involved in the team roping world, as I wean myself away from the college rodeos,” she said.

“I know one thing for sure and that’s that I will always be an active member in the rodeo community.”