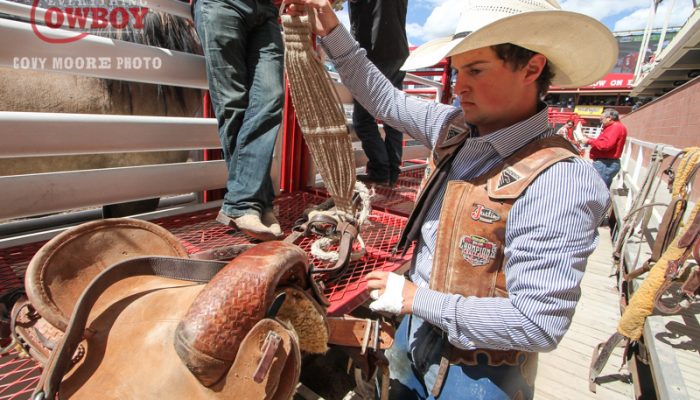 Watson excited to be heading to first CFR

For 23-year-old Jake Watson, rodeo is much more than just a job.

The young saddle bronc rider out of Hudson’s Hope, B.C. has had one hell of a breakout season this year.

“I think this year compared to last year I’ve matured a lot as a bronc rider. I take every horse the same and this year was just really fun. I had a really good time rodeoing,” said Watson, who just booked his first ticket to the CFR in Edmonton in just his second pro season in the CPRA.

“Some people think of it as a job but it’s definitely, it’s not a job to me. I enjoy it too much.”

For Watson, the opportunity to compete at CFR is a pretty surreal experience.

“It’s a dream come true. I grew up watching all them guys. A lot of the guys – like I was travelling this year with Dustin Flundra and Sam Kelts and it’s going to be a real honour to compete against those guys.”

Watson didn’t waste any time shaking off the dust at the beginning of this year. After competing in a couple of winter rodeos south of the 49th Parallel, the young cowboy made his mark in a big way by taking home the big cheque from the San Antonio Stock Show and Rodeo in February.

“That’s on a lot of guys’ bucket lists and I’m pretty lucky to get that crossed off so early in my career,” he said of the San Antonio win.

“It was kind of unbelievable when it happened; I wasn’t too sure if it was real. I was lucky enough to walk into the building a week before I rode there or I probably would have been way too nervous to stay on,” he added laughing.

From there, Watson came back up to Canada and wound up riding in a bunch of rodeos around the country as he picked up cheque after cheque to land himself in 11th place near the season’s end.

“I actually had a little bit of a rough spring, but I started picking it up here in the early summer. I was just having fun and travelling with some good travelling partners and just enjoying what I was doing.”

Although he competed at the CFR as a novice saddle bronc rider back in 2013, Watson said he’s excited to get back to the big stage.

“I’m really excited to be able to ride at Edmonton for the last year. I’ve been to the CFR and watched it and stuff and it won’t be the same. It’ll be interesting for sure in the coming years.”

Now, as he prepares for the CFR in Edmonton, Watson said he’s hoping to go in with a bit of momentum.

“I’m going to hopefully go in with a lot of confidence. I wasn’t too happy with my performance last time I was there but I took a lot of good out of it. So this time I’m going to go in knowing exactly what to expect and with a little bit more experience under my belt.”

South of the border, Watson ranks 15th in the PRCA World Standings with their season ending on September 30th.

Ahead of 16th by a mere, $260 the young Canadian bronc rider has two more chances to punch his first ticket to Vegas. He’s up in Pasadena, TX at the final Wrangler Champions Challenge of 2016 on Friday night then travels back to Canada for the Hanna Pro Rodeo over the weekend.

Stay tuned for how it all shakes down.