The Final Cut: Down to the wire race for CFR

The locker room of the Hanna hockey arena was as tense as that of Sunday of CFR, every breath was shallow and held. No rider was taking their situation lightly. Justin Berg and Justin Meston were quiet as could be, riding for their twelfth position in the saddle bronc riding. Kevin Langevin and Jason Wheeler, travelling partners were counting dollars and dreading that final ride knowing only one of them could catch that final spot in the bareback riding. And with a car and season leader on the line, Ty Pozzobon was focusing on doing what he does best to come out on top in the Bull riding.

After the ride and appropriate time to let it all sink in I had a chance to talk to Wheeler who had this to say about edging out his travelling partner:
“It’s kind of bitter sweet, because obviously you’re riding against the guy who’s pumped my tires and had me more confident than anyone going down the road. That’s tough that you gotta go in against him. But he’s the most standup guy; you can’t say nothing about Kevin Langevin.”

When asked about making his first CFR after such a long wait Wheeler said, “On the other side it’s been everything to me. I mean, you have your goals of being a world champion and a Canadian champion and injuries come, 15 years later to be back here is everything.”

McCord, everyone had colts, Wheeler was a little over $200 behind Langevin coming into the weekend, after riding three colts in McCord, and placing above his travelling partner he was in for CFR. As Wheeler put it, “They made me work for it.” Getting on the 4 horses in two days gave Wheeler the confidence to be able to handle 6 head in Edmonton in November.

The saddle bronc riding was not without its own intensity as the dollars were so tight coming into the last day. It took plenty of calculation by all parties, and waiting for the final horse to buck, a reride for Justin Berg to decide the final position that went to Justin Meston.

The bullriding year end title came down to the final ride before Ty Pozzibon was able to find out he had won, not only season leader, but the car put up for the Oyen Bull Riding and Hanna rodeo best score total. Having been the first to tell him, and seeing the relief and ecstatic joy on his face made the day all the more memorable to witness.

Without a doubt, regardless the small size of added purse at the two final rodeos it was amazing to see the heart and drive contestants put it down to the wire and you can be certain they will all bring that intensity to CFR November 7-11. 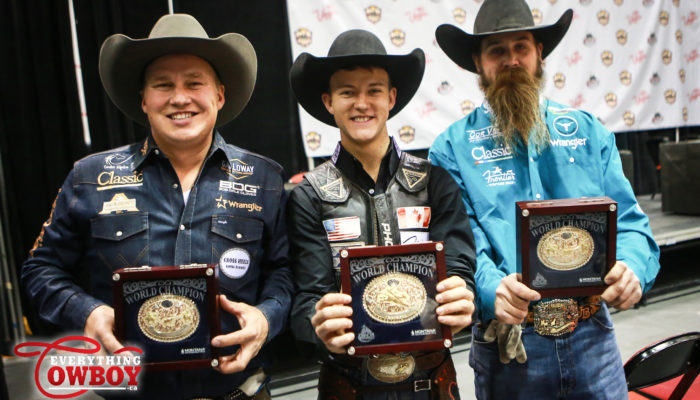