“One They Won’t Forget”

It was one of those times when the moment lived up to the hype.

While the third generation central Alberta talent had already punched his ticket to the CFR and a shot at defending the title he won for the first time in November of last year, he still has work to do if he hopes to make the trip to Las Vegas in December and secure a berth at the Wrangler National Finals Rodeo. Butterfield added a whopping $3100 with his second place finish at the IPE and Stampede in Armstrong, BC for a $4100 weekend, moving him ever closer to the top fifteen in the world. 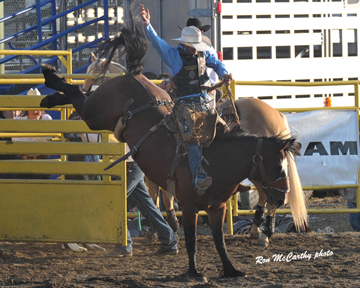 “I try not to look at the standings,” Butterfield confessed.

And that’s probably a good strategy. There’s still time and several rodeos left in the PRCA schedule as Butterfield heads back down south this week to continue his pursuit of a first NFR appearance. But if what he did with Pedro is any indicator, he’ll have a better than average shot at getting there.

Bull rider, Tanner Girletz, pretty much clinched first overall with a sensational 91.5 ride on Vold’s Proline Power at Okotoks and a third place (87 point ride) at Armstrong for another $2316.

“That was one of my goals from the start of the season,” Girletz admitted. “After last year when I didn’t get to the Finals I wanted to get back to Edmonton for sure but I wanted to not just sneak in. I wanted to really ride like I believe I can all year long. So winning the season would be a big deal for me.”

For several Canadian cowboys and cowgirls, the weekend’s three stops—the Nicola Valley Pro Rodeo in Merritt, BC was the third—brought huge sighs of relief as they clinched CFR berths.  Barrel racers Katie Garthwaite who won Armstrong and Kirsty White who won Okotoks will both be heading to Edmonton for the first time in their careers. Nancy Csabay will return to the CFR for a third time courtesy of her winnings over the second last weekend of the 2013 regular season.

In steer wrestling, Harley Cole can pack his bags for his first trip to the Finals as he kept up the pace he has been setting over the last six weeks with a second place $3691 cheque at Armstrong and another $320 at Merritt to clinch a spot at Rexall Place. And a $1200 plus weekend for 2007 Canadian champion, Todd Woodward, has him within a rock throw of a trip back to Edmonton. Like the rest of the doggers battling for the last couple of spots in what has been the most heated race of all, Woodward will have to get it done in Hanna and McCord on Canadian rodeo’s final regular season weekend, September 27-29.

While the race for the final team roping CFR positions remains heated with several teams still in the running, the battle at the top of the standings became even more intriguing as the season-leading duo of Clint Buhler and Brett McCarroll grabbed the win at Merritt with a 4.5 second time ($1026/each) while Levi Simpson and John Robertson won the Armstrong title with a 4.0 second flat run ($1962/each) to keep the pressure on Buhler and McCarroll.

Others who made big moves toward an Edmonton date included Oakdale, California’s Ryle Smith in the tie down roping. His $1200 win at Merritt jumped him into the top twelve for the moment but there are several ropers who will have a chance to secure a CFR berth at Hanna and McCord.

Rookie saddle bronc rider, Cole Neely enjoyed a third place finish at Armstrong with a $2600 84-point ride. Neely has now jumped into the top ten in the bronc riding standings and appears to have enough won to lock down a spot in Edmonton.

Keldron, South Dakota bronc rider Chuck Schmidt, underwent neck surgery in Calgary and is reported to be doing well after being bucked off and landing badly at Okotoks. Schmidt had been in the standings in both Canada and the US prior to what appears to be a season ending injury.

Complete (unofficial) results from Armstrong, Okotoks and Merritt can be found on the CPRA website: www.rodeocanada.com.

The final weekend of the Canadian regular season will take competitors to Hanna, AB Sept 27-29 and McCord, SK Sept 27-28.