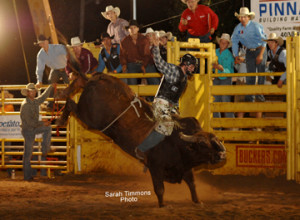 Jordan Hansen now knows he made the right choice. The 19 year-old, Okotoks bullrider passed on a chance to drive 600 kilometres to compete at a PBR Canada event in Lashburn, Saskatchewan last Friday night to instead embark on a 900-kilometre trek to Dawson Creek, BC for a shot at strengthening his chances of making the CFR.

“I knew I had a pretty good bull going up there,” says Hansen of his draw at the Wrangler Pro Tour rodeo in Dawson Creek. “I’d seen him a few times and he’s been good every time.”

Hansen’s decision was good one. An 86-point ride was good for a split of 2nd and paid the 2011 Foothills Cowboys Association season leader just under $2,100. The next night was even better for Hansen as he placed 2nd in Elnora to pocket another $4,060.

“It comes at a really good time,” offers Hansen. “I was talking to a few guys who said ‘you’re not too far behind. You put together a couple of good weekends and you won’t be that far out’. It kinda all fell into place this weekend.”

The $6,146 Hansen takes home from the two rodeos will unofficially bump the 2nd-year pro from 22nd to 9th in the Canadian bullriding standings, a late season move that puts him firmly in the mix for his 1st Canadian Finals Rodeo qualification.

“It would be a dream come true. I’ve watched my mom (barrel racer, Adel Hansen) there a couple of times. Knowing I could’ve been there last year lit a fire under me. It made me want to work a lot harder this year.”

Despite his huge move in the standings, Hansen wasn’t the biggest money winner among the bullriders this past week. Zane Lambert pocketed $7,049 after winning the Elnora Brahama Rama and placing 2nd in La Crete, Alberta. Lambert, who is also after his first CFR berth, has now surpassed the 20-thousand dollar mark in earnings this season.

Steer wrestler, Layne Delemont is also eyeing a shot at his first trip to Edmonton in November. The Chauvin, Alberta cowboy had a pair of 4.1-second runs in Dawson Creek and La Crete to finish first and third respectively. The fast trips were worth $3,643.

7-time Canadian Hi-Point champion, Curtis Cassidy showed off his versatility with three cheques, one in each of the tie-down roping, team roping and steer wrestling for a total payday of $2,630.