“Barrel racing can be very humbling,” admitted Guelly on Sunday afternoon, shortly after winning the Spring Classic Rodeo in Camrose, Alta. “I’ve had a lot of downs the last few years.”

It was the second win of the weekend for Canadian Pro Rodeo’s all-time leading money winner in the barrel racing. She also grabbed the first place cheque at the Kananaskis Pro Rodeo in Coleman, Alta. The victories were worth $3,731 – more than her entire C.P.R.A. earnings in 2012, the year in which her streak of twenty consecutive CFR qualifications was snapped, and over a third of her 2013 total.

“He” is 9 year-old, Scooter, Guelly’s potential next great barrel horse with bloodlines back to Buck and Reiner, the mounts she used to win her five Canadian championships. In fact, Scooter carries an even deeper connection to Guelly’s 23-year pro rodeo career.

“His mother is Flashy, the first horse I had when I turned pro. She’s a sister of Buck. And he’s out of Reiner’s dad.”

Steer wrestler, Harley Cole liked his first CFR appearance so much last season, that he’s eager to get back to Edmonton this November. He’s well on his way after winning in Camrose with a 4.1-second run and placing 3rd at the inaugural spring Dawson Creek, BC Stampede with a 4.8-second trip. His $3,494 weekend payday in the steer wrestling was second only to defending Canadian champion, Clayton Moore, who pocketed $3,584 by winning Coleman and splitting first in Dawson Creek.

“Making the CFR was always a goal,” says Cole. “But that was last year, this is this year. There are so many good bulldoggers up here, you have to keep looking forward. If you let your guard down, you’re going to get beat. I know because I’ve been beat before – quite a few times.”

Besides Guelly and Moore, bronc rider, Dustin Flundra and tie-down roper, Kyle Lucas also won two of the three weekend stops. The 33 year-old, Flundra won the most of any cowboy by taking home three cheques worth $4,666 while the 19 year-old, Lucas stuffed $4,097 in his jeans with victories in Camrose and Coleman. 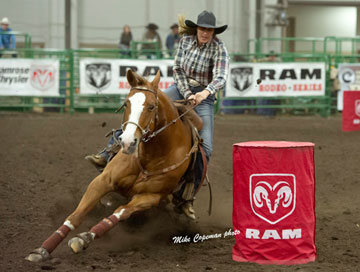 Of note as well, was Zane Lambert, the Manitoba bull rider who now makes his home in Ponoka, AB. In addition to his ½ split at Camrose that netted the CFR qualifier and reigning PBR Canada champion a $1502.91 payday, Lambert took his considerable skill set to Des Moines, Iowa for a PBR Built Ford Tough event where he won the first go round and split 2/3 in the average to grab a sizable  fourteen thousand dollar plus payoff.

Next on the C.P.R.A. schedule is the Stavely Indoor Pro Rodeo in Stavely, AB from May 8-10.

About the Canadian Professional Rodeo Association: The Canadian Professional Rodeo Association (CPRA) with it’s headquarters in Airdrie, Alberta, is the sanctioning body for professional rodeo in Canada. The CPRA sanctions over 50 events annually with a total payout exceeding $5.1 million. Join us for the 41st edition of the Canadian Finals Rodeo (CFR) November 5th to 9th, 2014 in Edmonton, Alberta at Rexall Place, our association’s premiere event. For more information please visit RodeoCanada.com or call (403) 945-0903. Follow us on Twitter, or like our page on Facebook, and watch the action on YouTube throughout the year.