Oyen, AB: There sure are some good looking match ups for Wednesday Night’s White Lightning Dodge Professional Cowboy Crunch CPRA Bull Riding at the RCMP Centennial Park Corrals in Oyen. It’s getting close to crunch time for a lot of the bull riders here in their 2012 efforts in making their way to November’s Canadian Finals Rodeo in Edmonton, AB. 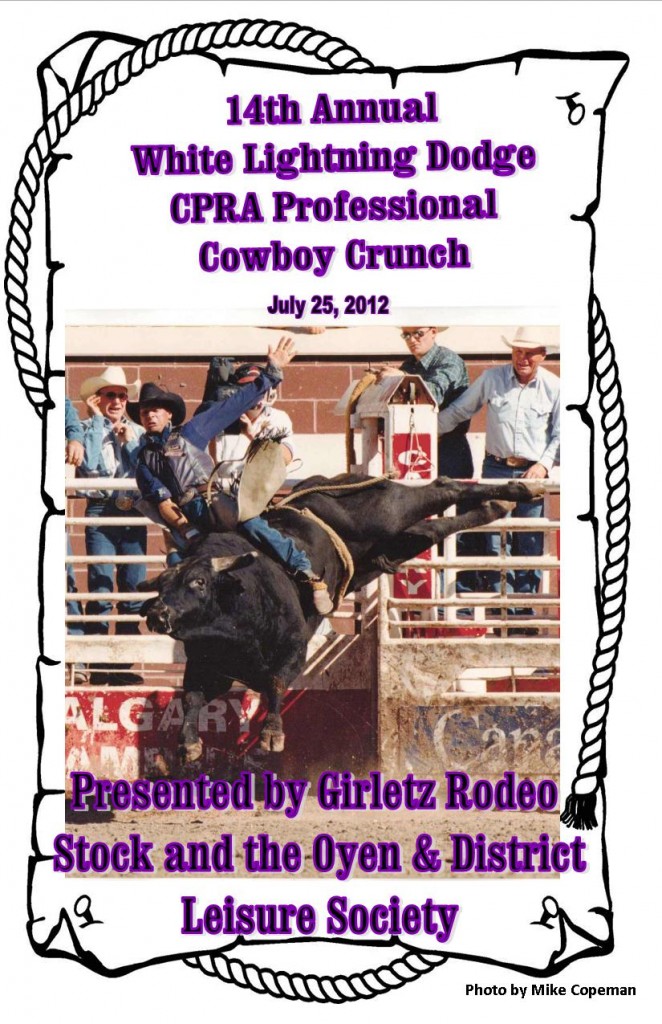 An event like Oyen can shake up the standings a bunch with it’s $10,000 in added prize money. When you factor in the entry fees which add up to $6,000 more ($200 x 30.) A CPRA Bull Riding Event Pays out more than any other event at the same level of added money simply because of the entry fees.

It’s going to be an exciting next three weeks in the CPRA with stops this week in Oyen then over to Cochrane, AB on Saturday evening. Camrose, AB takes place August 2nd-5th at the Big Valley Jamboree. Taking away the administration fees that’s about $45,000 that will be paid out. If you add in the Canadian Pro Rodeo Tour Stops in Medicine Hat and Strathmore it goes up to almost $70,000.

Someone could potentially not be ranked today, have a few good weeks, and be a serious contented for a Canadian Championship. We will see how it all turns out in the next few weeks.

This is my shot at talking about a few of the match ups for Wednesday. Kinsella was about 50/50 so this one should be better.

Beau Hill vs. SKRI10 Smoke Ring – Beau Hill hasn’t been to the CFR in a couple years now. He’s had some trouble with his elbow and and knee but is back now. He’s currently 11th in the Canadian Standings and looking to make his way back to Edmonton.  Ellie Skori’s bull Smoke Ring has been pretty rider friendly this year thus far. Look for Beau to start things off here on the right note in the low to mid 80’s.

Beau Brooks took second in Oyen’s Long Go last year on Smoke Ring. It’s amazing to see how far the quality of the videos have come.

Ty Patten vs. GRS601 Extra Mustard – Ty’s Dad, Rory this morning told me that he figured Ty was changing his luck by getting rid of his helmet this past week. It worked in the Long Round in Manor, SK as you all saw yesterday. I bet it works for him again Wednesday on the Girletz Bull Extra Mustard. His travelling partner Scott Schiffner won a long go on this yellow horned bull a couple weeks ago with an 86.5. Ty Pozzobon rode him to the exact same score the next day if I remember correct. Look for Patten to do the same and make himself up some ground in the standings.

This video shows Devon Mezei doing a bad hunk of riding on Extra Mustard back in Marwayne in April. Devon would probably tell you the same story.

Miles Pennington vs. GRS608 Johnny Be Good – This is a good solid bull from the Girletz’s that Miles should get himself back to the Short Go on. He needs to since he’s not currently ranked in the Top 20. This blueish horned bull should fall out of there and come around to the right. Miles gets along good with bulls that spin away from his hand so he should ride this one and be in the mid to low 80’s too.

Armando Davila Rodriguez rode Johnny Be Good for an 83.5 last week in Kinsella.

Chad Besplug vs. GRS527 Diego – Diego is a bull that the guys like to get on. He’s darn near the same every time and one you should get back to the Short Go on every time. My money is on Chad here for about an 84. After his win in Calgary for the $100,000 look for an interview in the next few weeks coming up with him. He won two of three rodeos this past weekend as well so he’s getting himself closer to ensuring his spot at this year’s CFR.

Since he’s good at making some bulls tougher than others, Zane Lambert dressed up Diego for an 85 last month in Wanham, AB.

Steve Turner vs. SB W4 Virgina Slim – I haven’t seen Virgina Slim since last year’s CFR. This crooked horned red bull been good all the way along though and I expect Steve to get a solid Long Go score here. There’s a good chance he might wave at his friends on the back of the chutes during the ride too. Or not since Oyen is a good ways from Teepee Creek, AB. Steve has been able to make his way to Edmonton more than anyone in the past decade and this year will be no exception.

Tanner Girletz rides Virgina Slim for an 86.25 at the CFR last year. Thanks to Juxtapose Productions and Hell on Hooves for this video they put on YouTube.

One guy you can’t count out right now either is Tanner Byrne. This is his winning  ride last year on Skori’s Mind Freak.

Check out the full draw here on the Rodeo Canada Website and add in your comments and own picks in the comment section below.

The White Lightning Dodge Professional Cowboy Crunch is Pround to Thanks it’s generous Sponsors including Fountain Tire and Napa Auto Parts in Oyen, AB. Please be sure to tell them who sent you too!