Las Vegas, NV: 2 Time PRCA World Champion Steer Wrestler Lee Graves and his horse Jessie had a great haul at this year’s NFR. Even with Lee not competing both Jason Miller and Shawn Greenfield took home over $200,000 riding Jessie. Both were in the running to be the 2011 World Champion until they both broke the barrier in Round 10 to leave the door open for Luke Branquinho to win it for his 3rd time.

Rick Thompson of Talk Rodeo was able to catch up with Lee at the NFR here not too long ago. Here’s the interview:

What did you think of the interview with Lee? It’s a bit long but he’s got some great stuff to talk about. He’s one of the best Steer Wrestler’s ever. Not many have won a World Championship. Let alone two.

Oh ya, the PRCA sent me an email today too talking about a “historical” week on GAC. It turns out there were 9.8 million viewers of the GAC’s live NFR coverage!!

How about those for numbers?? Has anyone heard how Sportsnet’s numbers were? Have you all thanked them for airing it yet?? 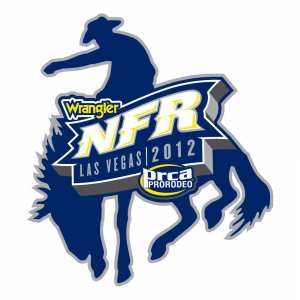 The colors sure do fit it’s title sponsor of Wrnagler.

What do you think of next year’s NFR Logo?

I think it’s pretty cool but I sure would like to hear your thoughts since mine shouldn’t be on only ones ever on here!