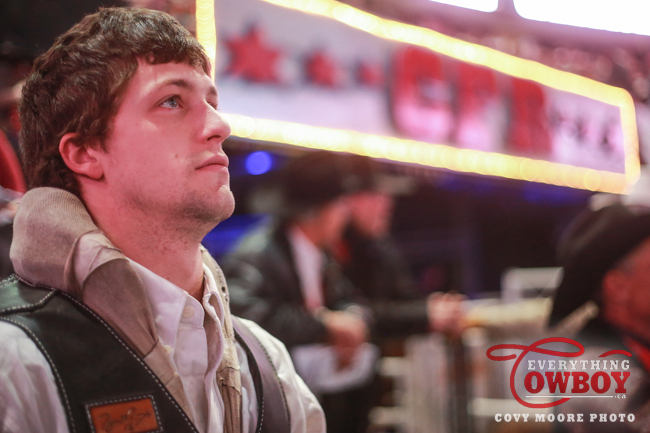 Goodine went down to the last ride of the regular season before qualifying for this year’s Canadian Finals Rodeo.

“There was no pressure,” the 27 year old second generation cowboy stated. “I came in in twelfth spot. And I’m just ecstatic to be here riding with these guys.”

Goodine has battled a lower back injury for much of the season and has had to adjust his riding style to compensate for that.

“I owe everything to the Canadian Sport Medicine Team. If it wasn’t for them, I would have stopped riding this year. Every time a horse would kick up, my legs would go numb. They helped me out with physiotherapy and making everything strong so I could ride.”

Goodine wasn’t the only excited Alberta athlete tonight. Barrel racer Diane Skocdopole had never won a buckle until the Night of Champions – the kick-off event for this year’s CFR – where she received two. One for Permit Award winner and one for Rookie of the Year. Twenty four hours later, the Big Valley, Alberta cowgirl jockeyed  her 8 year old mare, Sonic, to the go-round win on night number one of the 6 performance CFR to collect her third buckle in two days.

“I wasn’t nervous at all,” Skocdopole admitted. “I just walked up there, talked to my horse, went around the corner and away we went.” The talented duo are not strangers to the Northlands Coliseum having won second at this summer’s inaugural K-Days Rodeo – also staged at Northlands’ indoor venue.

“I’m pretty sure my horse knew where she was,” Skocdopole explained. “She’s smart. It has to be a comfort zone having run here before. I had no expectations coming in here; I’m just taking one run at a time.”

The second performance of the 2017 Canadian Finals Rodeo is set for Thursday, November 9 at 7:30 pm. Complete results are available at rodeocanada.com