Video is all courtesy of Wade Marchand. Thanks a ton for getting all of these for us Wade!

Starting things off, Kyle Lozier rode Free Style of the Marchand/Kesler string for a 79.5.

Tanner Girletz took on the Marchand/Kesler bull 27 Casanova for a solid 83 to kick things off.

Dan Hansen took on the Marchand/Kesler bull Anti Venom. Anti Venom kicked the lights out and threw Dan off this time around. Look out for this one this year.

Tyler Pankewitz then rode the Outlaw Buckers bull T69 Blue Zone for an 82.

Steve Turner rode the Outlaw Buckers bull 68 Alberta Premium that is known to be pretty welly in the Long Go. He managed to stay out of the drink and get himself back to the short round with a solid 85

Next, Jody Turner rode the Outlaw Buckers bull 700 Joe Smoe to tie his brother for the win in the Long Go

Near the end, Miles Pennington put up this solid score on the Franklin Bull 808 Old School at 80.5 to get himself back.

Between the long round and the short round, the steer riding was held. This is the only video I’ve seen so far from Wade. He said this heifer bucked harder than some of the bulls!

Going into the Short Go, here’s how they stacked up.

It started off with  BC Native Kyle Lozier and this 84 point effort.

It all came down to Steve’s older brother Jody. He had to beat Steve’s score to win the event. He did just that, by one point, cashing in at 87.

Here’s how the final standings ended up. Please remember all of these results are unofficial.

Thanks again to Wade & Cassie on all these great videos of the event!
The CPRA takes a weekend off this coming weekend and resumes action from Stavely, AB May 10-12. 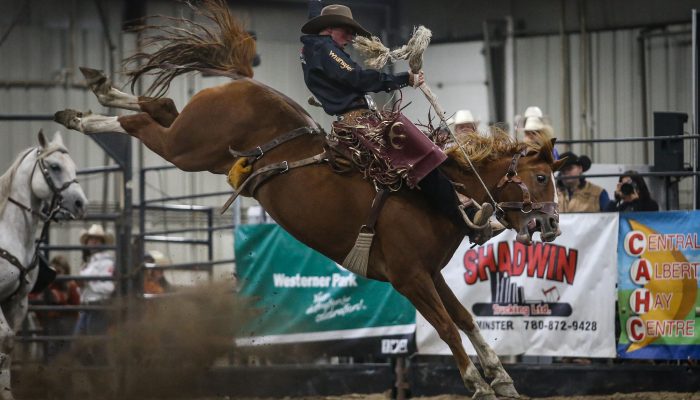