This news release comes courtesy of the Canadian Professional Rodeo Association. Learn more about them at www.RodeoCanada.com

What do you think of this exciting news?

ROAD TO THE CFR – RODEO CANADA EVENTS TO BE TELEVISED

Canadian Professional Rodeo is coming to your TV and computer screens!!

The timing is especially exciting as Canadian professional rodeo gears up for the 40th Anniversary of the Canadian Finals Rodeo.

The move is designed to increase awareness of professional rodeo and enable its fan base to grow and become more involved with the sport. The program will feature a combination of webcasts and telecasts of a designated performance from each of the selected rodeos and will include live web streaming of the first five CFR performances and the national broadcast of the final CFR performance which will air LIVE on a national Rogers cable channel that is also available nationally on satellite. (Look for the live webcasts on www.rodeocanada.com and www.cfr.ca.)

“The Canadian Finals Rodeo is very excited about the most recent announcement pertaining to TV and webcast coverage of the CFR,” enthused CFR Commissioner, John Windwick. “It’s an opportunity to share all six performances with rodeo fans across Canada and the world. We know we have the very best in rodeo at the finals, and this is just another way to spread the news about the amazing talent that comes to Edmonton each year in November. Cowboys and cowgirls work hard all year to make the finals in Edmonton, and not all of their dedicated fans can make the performances, so this is just another way to help people watch the sport they love, and maybe promote the sport of Rodeo to a new audience.”

CPRA Rodeo Administrator Kynan Vine adds. “We are very pleased about the upcoming rodeo coverage. The CPRA has been working very hard the last couple of years to try and expose rodeo to as many fans and potential fans as possible. Working with a group like Ilink and with Rogers brings a whole new level of exposure for us. Canadian Pro Rodeo has not seen this kind of television coverage since the 1980s with the Budweiser series. We are very thankful for all the hard work of everyone involved and especially the cooperation of the rodeo committees.”

A new website that will focus attention on the program will go live on June 10 – www.roadtothecfr.com. See the website for further details as they are finalized and announced.

The schedule for the season broadcasts is as follows:

A one hour Highlight show of each of these shows will air the following weekend on (Rogers Media), Check roadtothecfr.com or www.rodeocanada.com for dates, times and information.

In addition, Road to the CFR will be giving away a CFR VIP Experience after each rodeo through the website – 2 Mini-Pack tickets to CFR, 2 nights’ accommodation in Edmonton including breakfast, 2 Adult Edmonton Attractions Passes and a Behind the Chutes tour at CFR.

Radisson Hotel Edmonton South General Manager, Robin Cumine shared the optimism about the agreement, “This partnership, which includes the Edmonton Destination Marketing Hotels group, will open up the sport of Pro Rodeo to a new generation of fan, and keep the sport front and centre throughout the Pro Rodeo season. With so many professional sports competing for eyeballs and ticket sales, the success of the CFR depends on increasing its fan base, and this partnership goes a long way to both reaching out to the new Pro Rodeo fan as well as providing the current fan a way to watch their favorite pro rodeo riders. Partnerships like this are a key component to ensuring the continued success and viability of Pro Rodeo in Alberta.”

It is hoped that through continued support of the Canadian Professional Rodeo as well as growth of the Canadian Finals Rodeo, we can host the CFR in Edmonton for the next 40 years to come.”

The new webcast/telecast initiative promises to be an exciting step forward for Canadian rodeo as it brings the ground-pounding excitment of the sport into living rooms and onto television, computer and iPad screens from coast to coast to coast. See the soon-to-be-live website for more details. 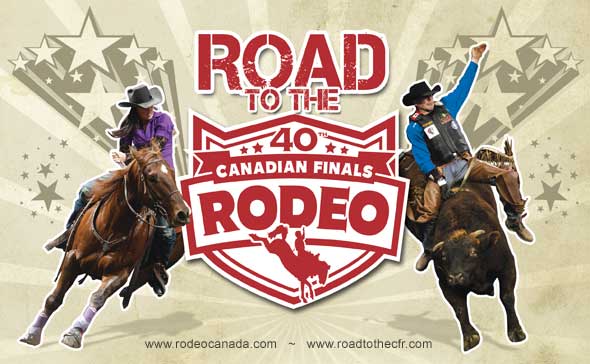