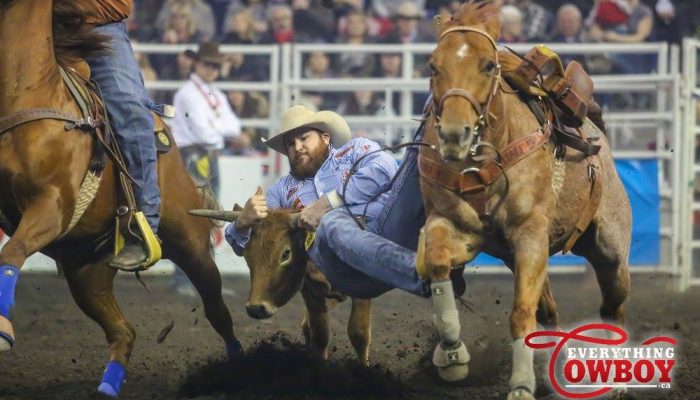 It was simply a case of unfinished business.

For Canadian team ropers Levi Simpson and Jeremy Buhler, CFR 44 offered the opportunity to fulfill a dream that had been left incomplete up to now. While Ponoka, Alberta header, Simpson, had a Canadian championship to his credit, to go along with his 2016 World Champion buckle, heeling partner, Jeremy Buhler, was still looking for his first Canadian title. Despite a slow start to their CFR (they had two no times in the first three rounds), the duo blazed their way through Super Saturday with back to back 4.1 second go-round winning runs and added a 4.2 second run on Championship Sunday to emerge as victors.

“It was very exciting to follow up a ‘dream come true season winning the world’ to come back up here, finally have a good year to come in here number one then outlast everyone until the end and stay number one.”

Simpson and Buhler, who also finished fifth in the average, ended the season with $59,006 each for a comfortable margin over second place finishers Justin and Brett McCarroll.

Another season leader who was able to win a Canadian title was saddle bronc rider Layton Green of Meeting Creek, Alberta. Green saw second place man – and reigning world champion – Zeke Thurston, make up considerable ground on this lead over the first three rounds. But the 23 year old Green turned things around for the last three rounds of CFR 44 and restored his comfortable edge. What was an amazing year for the second generation cowboy ended with Green establishing a new saddle bronc season earnings record. He wrapped up the year with $107,363 to move past eight time Canadian Champion Rod Hay who had previously held the record at $101,646 (set in 2005).

“It’s pretty special; it’s something I’ve dreamed of as long as I can remember,” Green said. “I always wanted to ride broncs and wanted to be a Canadian champion. It’s a dream come true. And to walk out in the arena with one of your best friends (Thurston) and know that either you or him is going to be Canadian champion is something I’ll never forget.”

For the first time since 2009, a Canadian reigns supreme in the tie down roping event. Nanton, Alberta cowboy, Logan Bird edged fellow Canadian, Riley Warren, by less than $1000 for the win. Bird had to overcome a broken barrier in the last round, and capitalized on the struggles of several in the field of 12 (including the defending world champion Tyson Durfey and the last Canadian to win it, Alwin Bouchard) to capture the title.

“When you come to the CFR, you’re not just roping against anybody,” Bird stated. “You’ve got to be on your game because these are the best in the world.”

The 23 year old’s success is due, in large measure, to two things: his encyclopedic knowledge of the calves and his 13 year old gray gelding, TJ, the 2016 tie down roping horse of the year. “I wouldn’t be here without TJ. He helps me out so much. In my opinion, he’s probably the best horse in Canada, and close to the best horse in the world.”

The closest race at this year’s CFR was in the ladies barrel racing where Aldergrove, British Columbia cowgirl, Carman Pozzobon, slipped by Texan, Jaime Hinton, by just $183. Pozzobon, the Canadian season leader, finished up the year with $68,399 and her first gold buckle.

“My main goal (on the final day) was to get around all three barrels; I didn’t care if it was ugly or not,” the gifted horse trainer said. Pozzobon was first out on Championship Sunday and finished fourth in the round with a 14.660 to capture second place in the average en route to the title. The two time CFR qualifier was riding her seven year old mare, Ripp n Lady (Ripp), 2017 Canadian barrel horse of the year.

The steer wrestling honor went to Benton, Arkansas cowboy, Jason Thomas, who – like Harwick – put together six go-round placings and an average win for a total of $59,177 to best second place finisher, Scott Guenthner, by $5000.

And in the bull riding, season leader, Garrett Smith of Rexburg, Idaho, laid claim to his first Canadian championship by riding four of his six bulls and finishing second in the average for an $8000 margin of victory over the second place man, Tanner Girletz. Girletz, the 2006 Canadian champion, was at his ninth Canadian Finals and announced before the start of this year’s CFR that this was his final season as a bull rider.