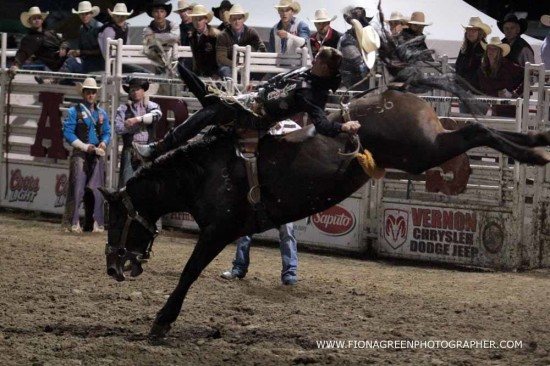 Among the others joining him for a share of the $2 million dollar pay-out in Calgary next July are a couple of past Stampede Champions, Dustin Flundra in the saddle bronc, and Matt Shiozawa in the tie-down roping. Dakota Buttar captured the bull riding title and Cody Cassidy, the steer wrestling. They can all breathe a sigh of relief now, knowing they have secured a position for next year’s Stampede Rodeo.

Callahan Crossley claimed her first Wrangler Tour Championship and a $2,500 cheque helping her push for the CFR. Meanwhile in the team roping Brett Buss in the heading and Clay Whyte on the heels took top honors in the Wrangler Tour Standings.

All in all it was a great weekend of rodeo in Armstrong with near record attendance and some awesome professional rodeo action.  If you would like to see more photos from the Wrangler Tour Shootout, check out the Armstrong IPE’s Facebook page.