Ten straight days of rodeo came to an end with a bunch of $100,000 cheques being handed out in an absolute deluge. In fact, the final two days of competition were rather wet. It makes for a miserable yet overjoyed experience for a photographer, and me being the eternal optimist I am, I brought plenty of protection for the equipment, but maybe not enough for me.

Either way, rain and mud in rodeo makes for the best of the best photos. Hope you enjoy some of my favourites from the final two days of the Calgary Stampede rodeo. 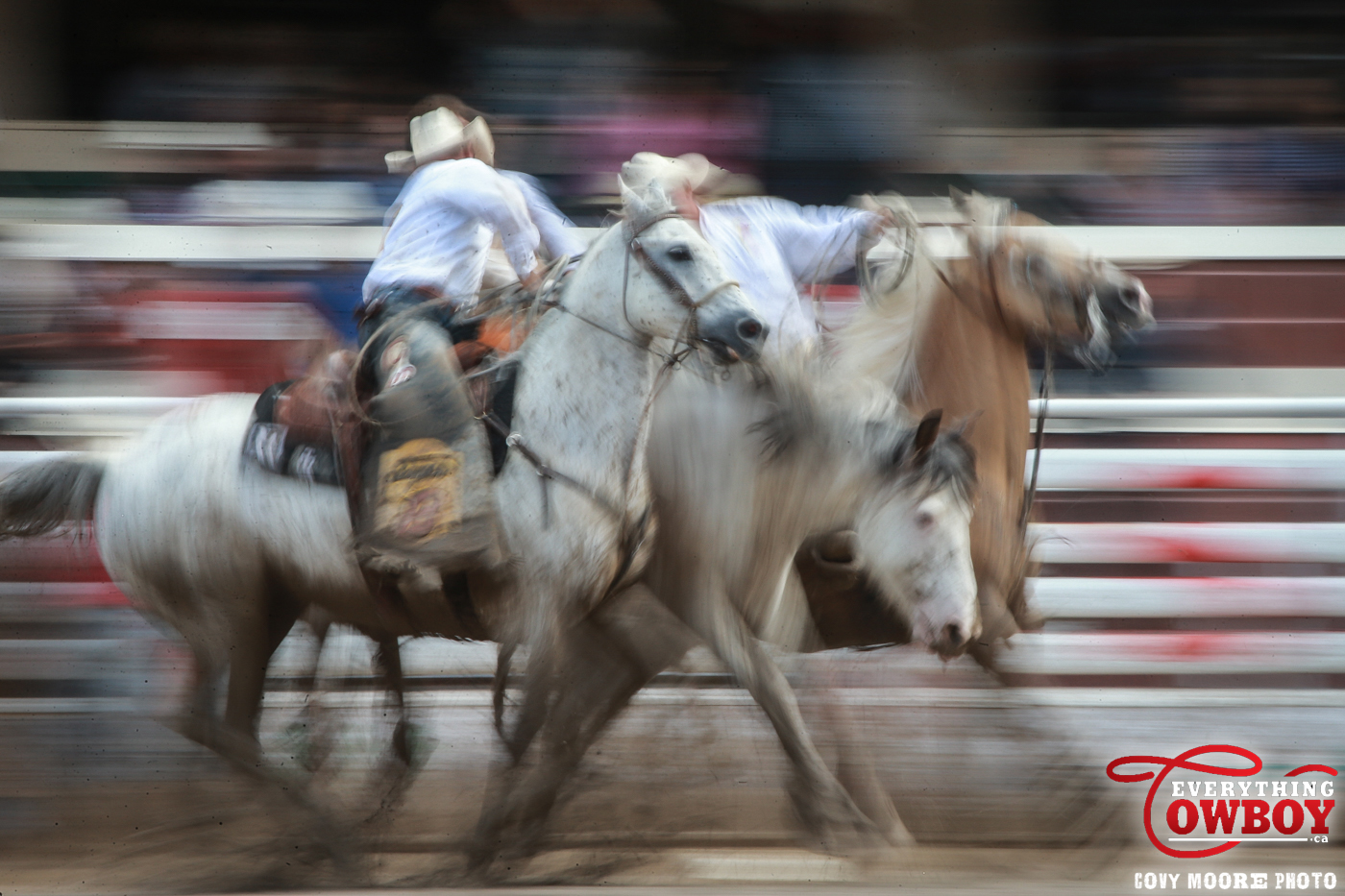 The pick up men of the Calgary Stampede.

They have a million things to to each and every ride with just about any sort of situation to be thrown at them. Rodeo is not what it is without the guys who help competitors off of bucking broncs. Sometimes there is only one way to show the furiousness of someones job, and that is to pan it. 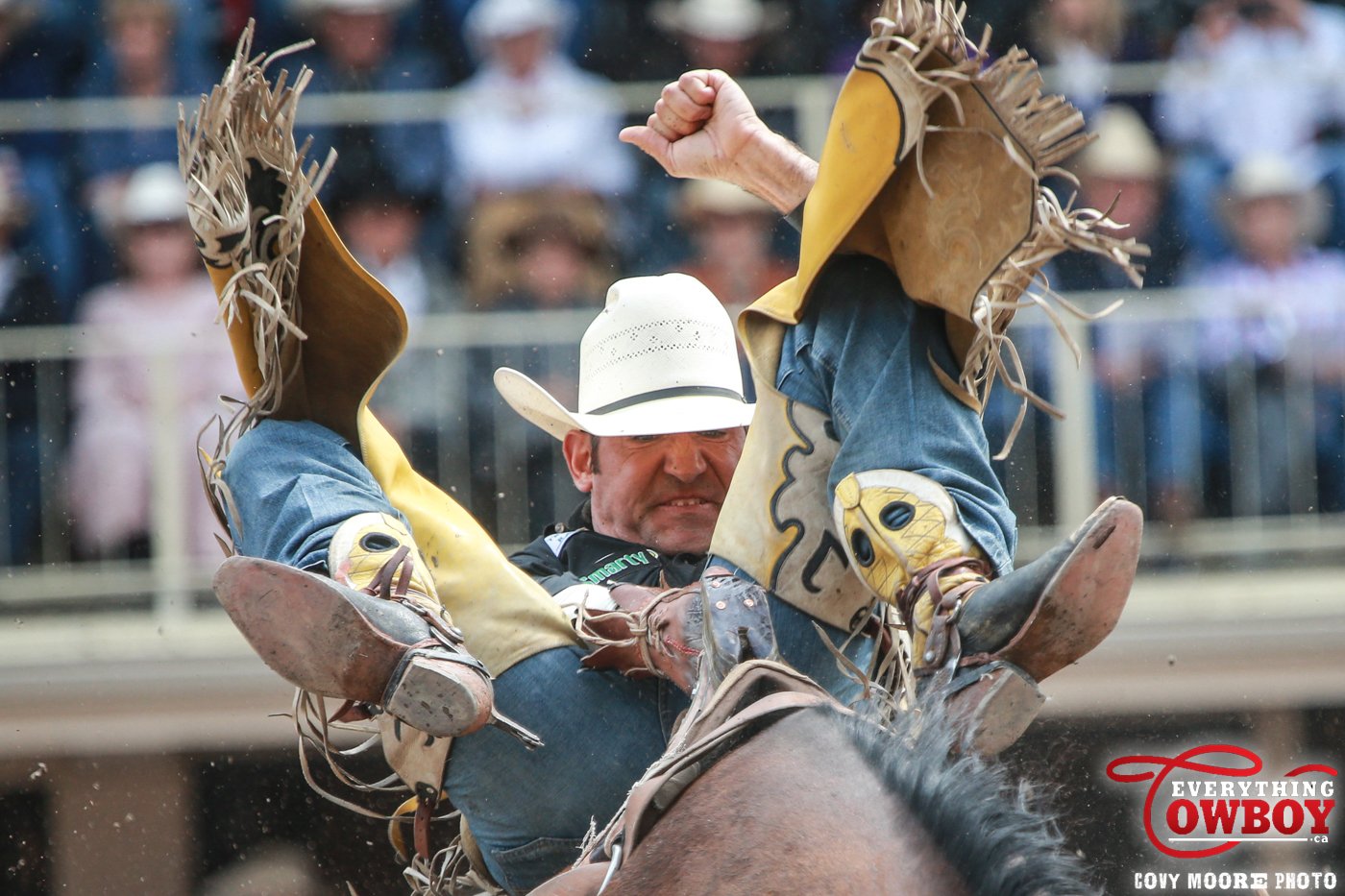 For the longest time I absolutely hated seeing images that were not your normal action shot of animal and rider stretched out, feet planted, etc. I always felt the image wasn’t worthwhile because the cowboy wouldn’t want to buy it, or have it represent them and their riding. But then I started capturing things like this and I realized that while the sport has its “proper technique” that likes to be highlighted, sometimes the in-between moments for those perfect technique make for entertaining images too. Bobby Mote grimaces as he spurs his bronc during the Calgary Stampede’s Wildcard Saturday. 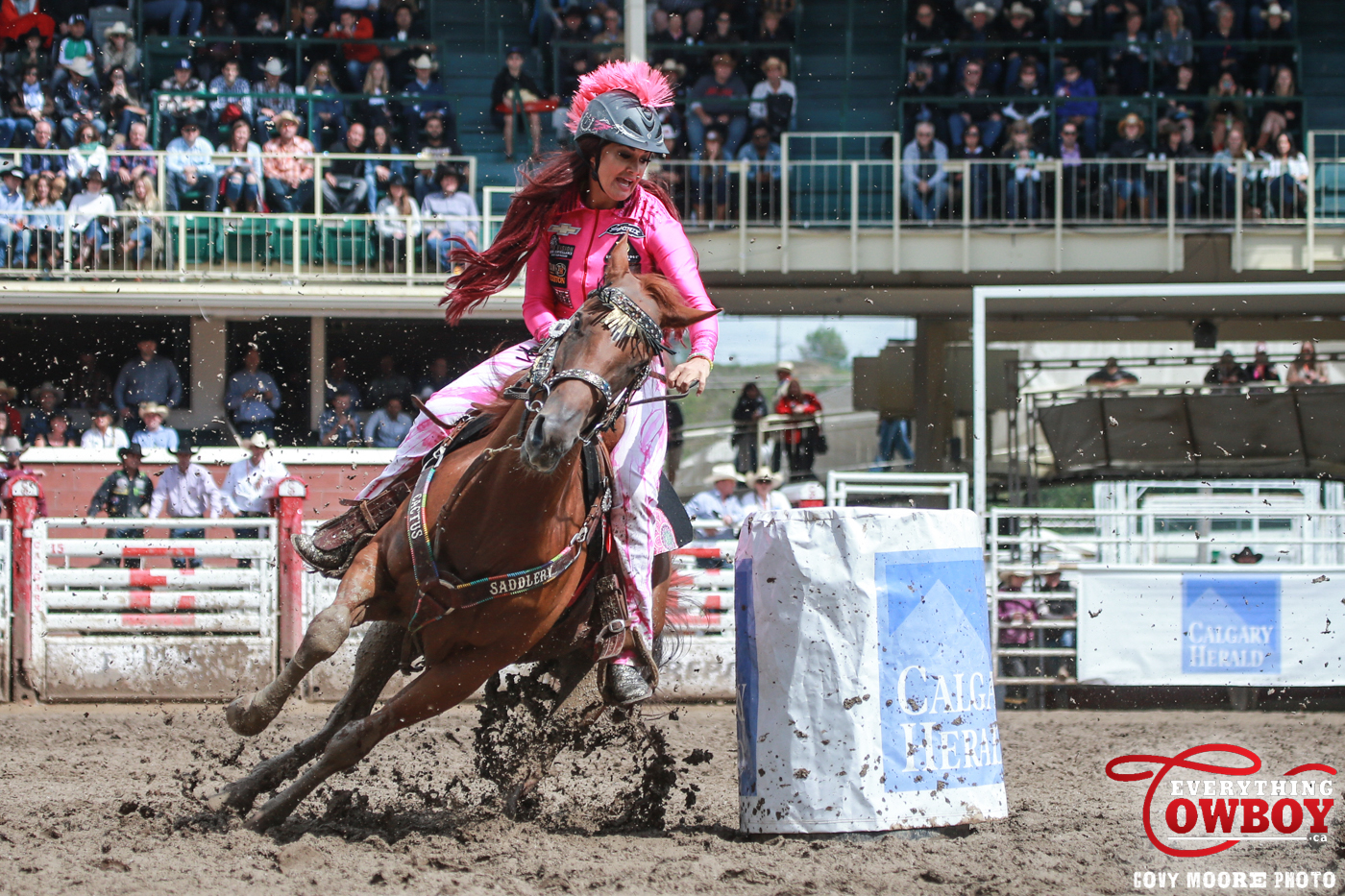 This lady knows how to get in the newspapers, in the photo galleries and have every camera focused and clicking during her runs. Whether its her outlandish outfits, her amazing colours or the excitement that he and her horse, Baby Flo, display each run, she is a crowd favourite. She was stuck running in Wildcard Saturday and was unable to find a route to the $100,000 this year. 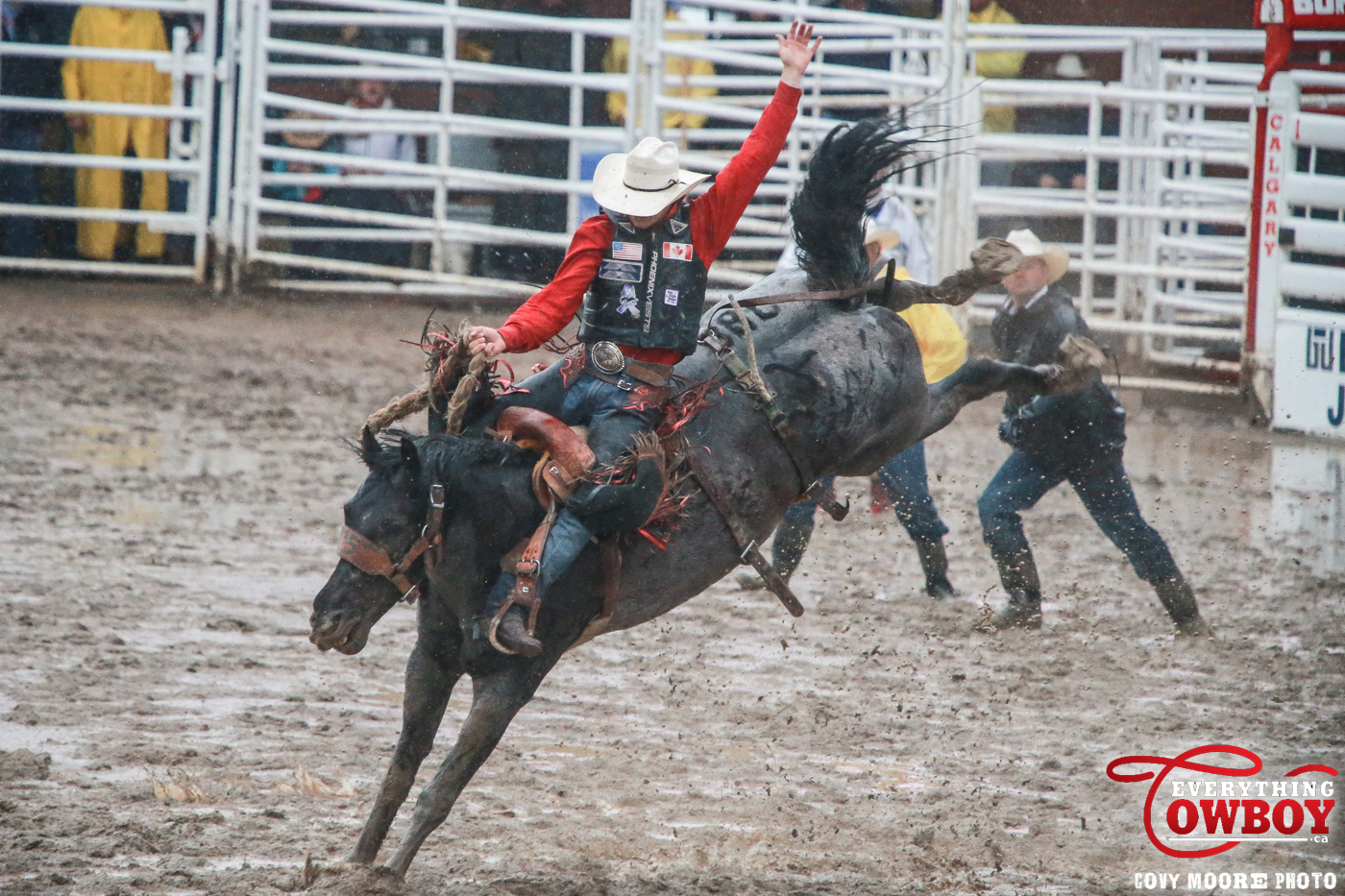 I don’t always like to highlight the “standard action” photo, but I am proud of how this turned out. I am not using $15,000 lenses, and after a good soaking I decided to head up and shoot overhead from a covered location available at Stampede. I was worried my images would lose being up there, but being able to capture the perfect action shot despite the conditions of the only Canadian to take home $100,00 at the Calgary Stampede this year made my day. 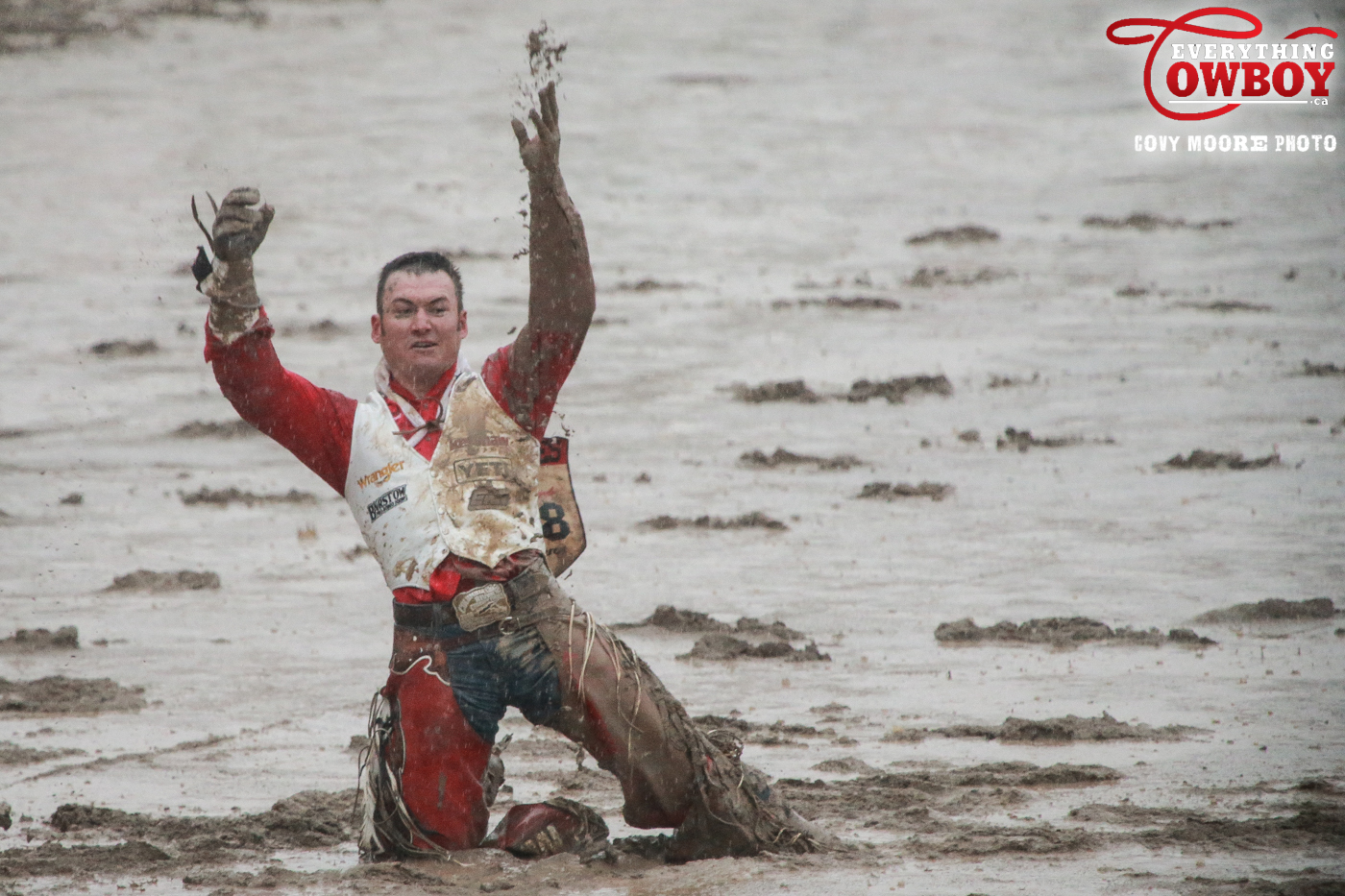 Steven Peebles celebrates his $100,000 winning ride in the mud.

But the 4-man short round the mud wasn’t really mud anymore. It was just soup. Which made for great images of guys after they had hit the ground. Just wait until you see the bulldogging. 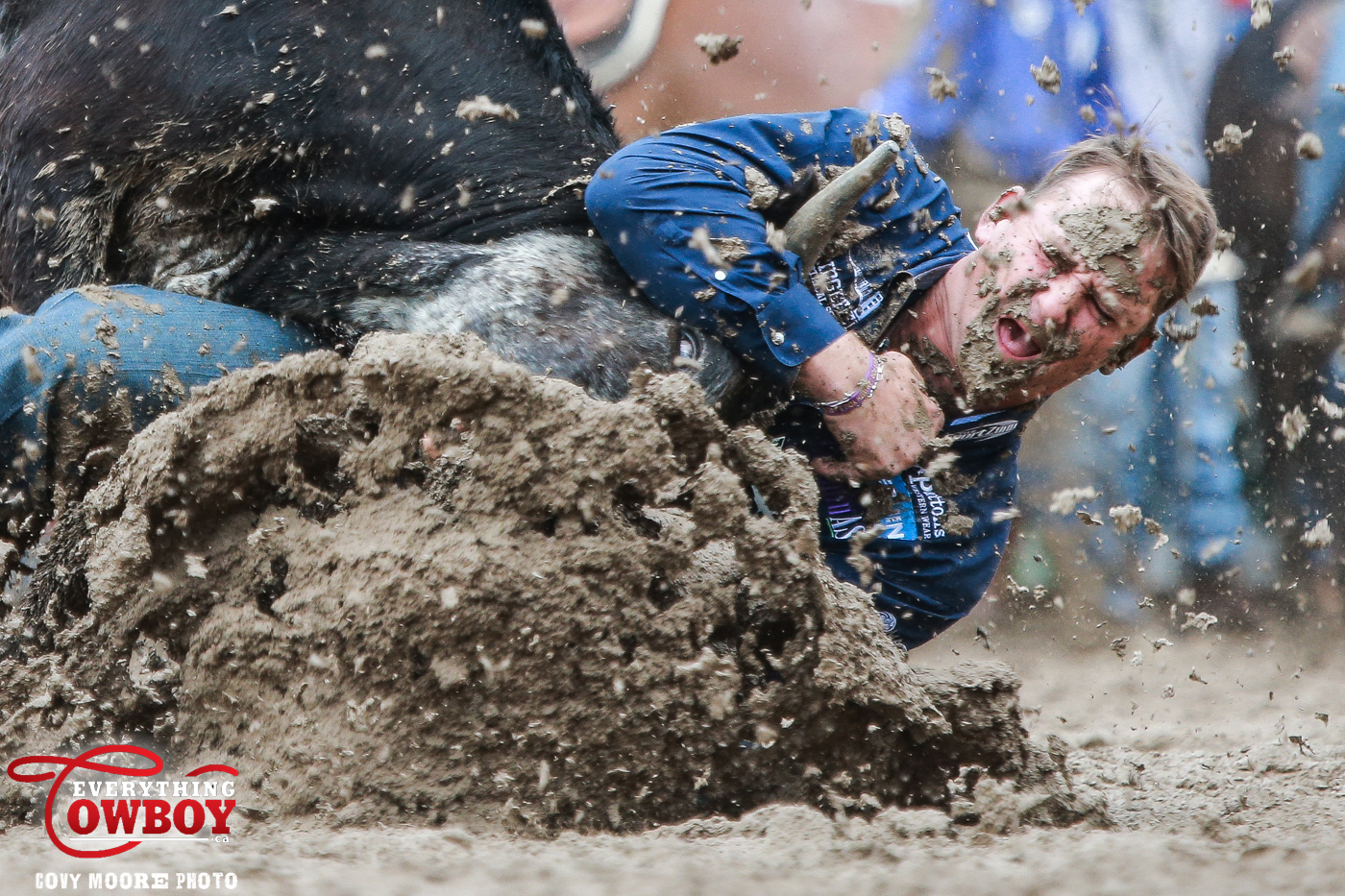 Hitting the ground after sliding off a charging horse and onto a steer is always an impact that makes a splash, whether if its wet or dry. But when Casey Martin, from Oklahoma, dug his boots in, he created a tidal wave of mud, and event took a shot to the face as well. Made for good images and great watching. 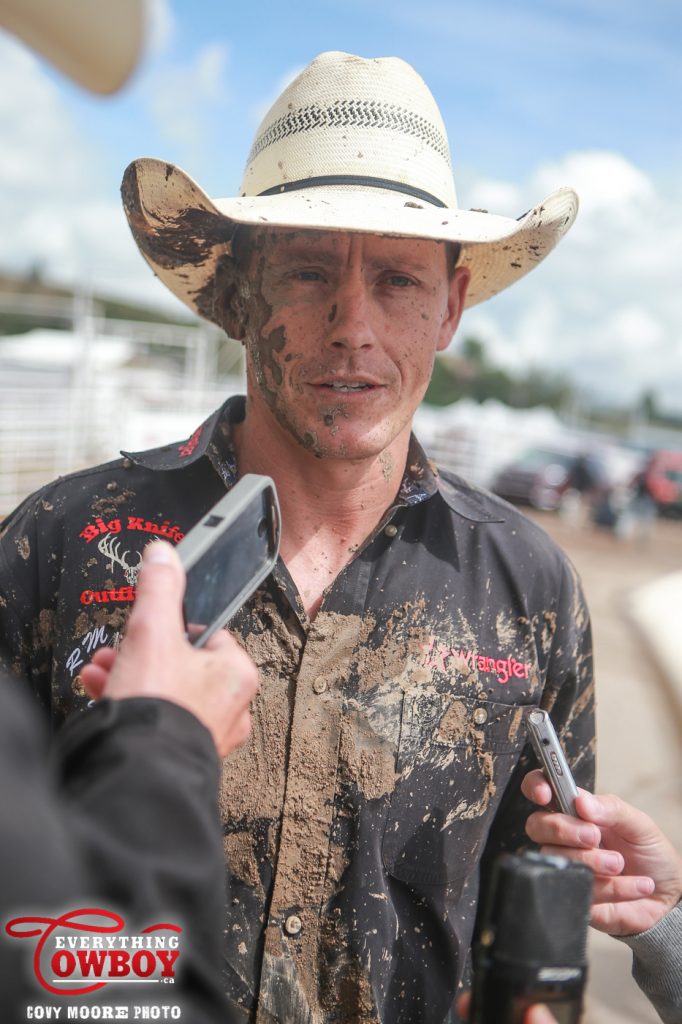 And after the run at Calgary, winners have to talk to the media. Donalda’s Cody Cassidy didn’t have a chance to wipe away the mud before being ushered in front of cameras and microphones alike. 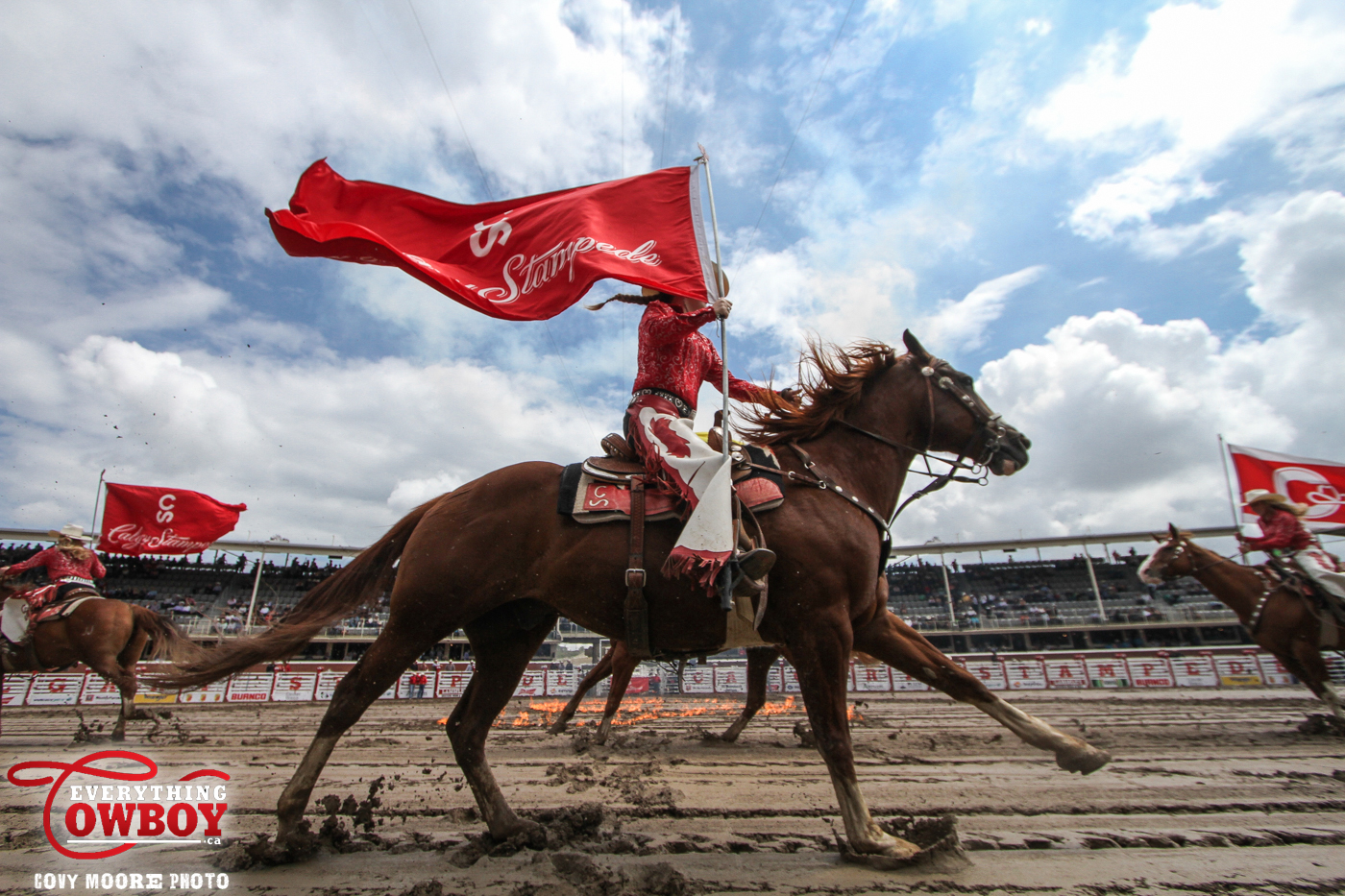 That is a wrap. This image shows the mud quite nicely. This was the first of two super wet days. Think of what that mud looks and felt like 24 hours later!

A few thousand images (understatement) hit the hard drives, tags and organization complete now. With Medicine Hat and Strathmore on deck for me, I am looking forward to a few days indoors and behind the computer. Thanks for following along with Everything Cowboy for the 2016 Calgary Stampede.