Hangin’ Out With Glenn Street

I met Glenn in Oklahoma City, OK in late January of 2012 at the National Sports Forum. I had met Calgary Stampede Employees Pat O’Brien and Jason Coxford there earlier in the week and they introduced me to Glenn and Street Characters’ Direct of Marketing, Aubrey Fishman. Oklahoma was a bit of a different place to make some new friends in Calgary but since I had only moved to Calgary a month earlier I am glad I did.

Once back in Calgary I’ve kept in contact with everyone and actually asked Glenn about a lawyer he would suggest here in town since I was looking for some guidance with this very website and the business around it. About a week later I met with Glenn’s friend, Wayne Logan who helped me sort everything out and keep moving forward.

A year later Glenn  noticed the video I posted about the Cowboy Downhill in Steamboat, CO on the Everything Cowboy Facebook Page. My post said something along the lines of “What do you think about having a Canadian version of this event.” Glenn commented saying “I have a friend named Sandy Best from Lake Louise. Would you like me to put you in contact with him?” To which I called him about a minute later, excited of the idea. I phoned Sandy not long after and once Kynan Vine, Brandon Thome and Kathy Butkovic were on board we pulled off the first ever Twisted Tea Ski Louise Stampede presented by Ranchman’s on March 30th, 2013.

A huge Thank You is in order to Glenn for helping get the ski race started. We are already looking forward to next year.

In March 2012 while having lunch with fellow Entrepreneurs’ Organization (EO) Member Paul Vickers of Penny Lane Entertainment, Glenn suggested a charity poker tournament at Cowboys Nightclub where a Stampede Rodeo Contestant or Chuckwagon Driver would compete at each table. The first ever Cowboys Poker Tournament will be held on Thursday July 4th.

Back to Thursday Night’s events now, Glenn invited me out to an Entrepreneurs’ Organization Event at the Earl Grey Golf Course called “Meet the Olympians.” Donovan Bailey sat at our table with us. I can remember being a kid and hearing tons about Donovan. Even today, Usain Bolt is the only man faster. Donovan still holds the world record as the fastest man to ever run the 50M. Once he found out I was a bull rider, he mentioned JP Veitch and how they were friends. Bailey retired from Track and Field in 2001. 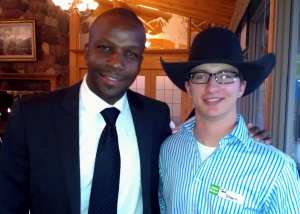 During supper each Olympian was asked a question and told a story. There were a ton of stories I related to after competing in sport myself for a number of years. Being around them made me want to ride bulls again, more so, their stories made me want to do better with this business as every athlete’s story talked about being focused and committed to their goals and dreams.

After supper we headed over to Flames Central where we met up with Karen Connellan of the Calgary Stampede (who I met at this year’s National Sports Forum in Orlando, FL with Pat and Jason) for the Coca-Cola Covert Concert. We missed Dean Brody but caught the last bit of Down With Webster, both of who will perform on the Coca-Cola Stage for the 101st Anniversary of the Greatest Outdoor Show on Earth. I think the concert I’ll want to be at the most is that of Alberta’s own, Corb Lund on July 7th. I’m hoping Walk Off the Earth brings their guitar they all played together to their July 13th show too. You can see that full lineup here.

I think one of the coolest angles of the Calgary Stampede is how it’s here for everyone. Where else would you see everything from a rodeo and chuckwagon races, an evening first class show, a midway, food far all corners of the earth, top level concerts of all genres all in one day all at a year round event center that every single person in the city and many from all around he world have the opportunity to visit any day of the week? I’m sure there are some places similar, but none that are the same.

On the way home, Cowboys just happened to be on the way so we stopped in there of course. On the way out of there Glenn introduced me to the managers of the new Zen 8, a Japanese Teppanyaki style restaurant that’s yet to even have it’s grand opening.

At one point of the evening someone said I had the greatest tour guide in the whole city showing me around. I totally agree with that person and look forward to the next time.

Thanks Glenn. Stampede 101 isn’t that far away now. 40 days and counting. Check it out at www.CalgaryStampede.com