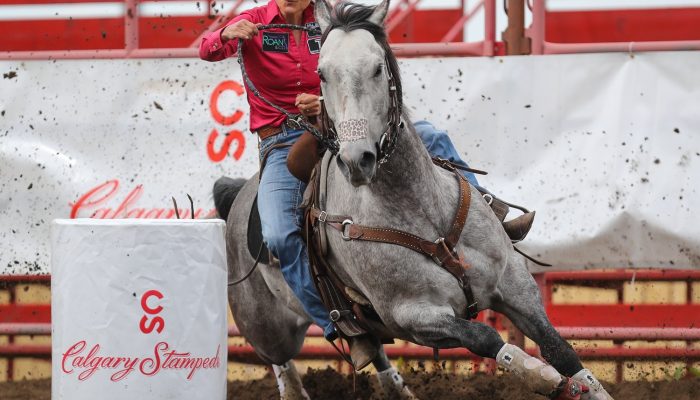 RIMBEY, Alberta (June 15, 2022) – It was an exciting two days at the Calgary Stampede Ladies Barrel Racing Qualifier. Four contestants have qualified for the Greatest Outdoor Show on Earth, based on a three run aggregate format.

Nancy Leischner won the first round, placed 11th in the second round, and won the aggregate on the one and only Famous French Master aka Trooper (Famous Master X Frenchmans Jewel); a horse she had listed that nobody bought. Just one month ago the duo filled their CPRA permit after winning Taber, now they find themselves headed to the big show in Calgary. “I’m overwhelmed with gratitude tonight. First of all, for this horse… he’s truly my “once in a lifetime”, and he takes that role very seriously.” she said on her Facebook page.

Bayleigh Choate is an 18 year old whose currently leading the Rookie of the Year race in the WPRA. She came in entered on three phenomenal horses and made it on the one she “least expected” to make it, Hail To Be Famous (Dash Ta Fame X Itty Bitty Boon). She was the only rookie to make the finals at San Angelo Pro Rodeo, and won the semi finals round at Rodeo Austin. Adding a qualification to the Calgary Stampede makes this an even more exciting rodeo season for Choate.

Two time Wrangler National Finals Qualifier, Jessie Telford brought some amazing athletes to the race. She has made it through to Calgary on Fast Lane To Fame aka Zeus, a horse she picked up just six weeks prior to the event. Zeus had been turned out for two years. Her friend Kyle McEntire called her and said, “You need to buy this horse, he’s extremely fat, and you won’t be able to actually try him, but you need him!”

Virginya Foran and her great horse Paleface finished fifth overall. Virginya would be next to get the call if there needs to be any substitutions to the contestant list. Virginya and Paleface are the 2019 AQHA Barrel Racing World Champions, with many 1D and rodeo placings on their resume.

The Calgary Stampedee kicks off Friday, July 8th and runs through until Sunday July, 17th.