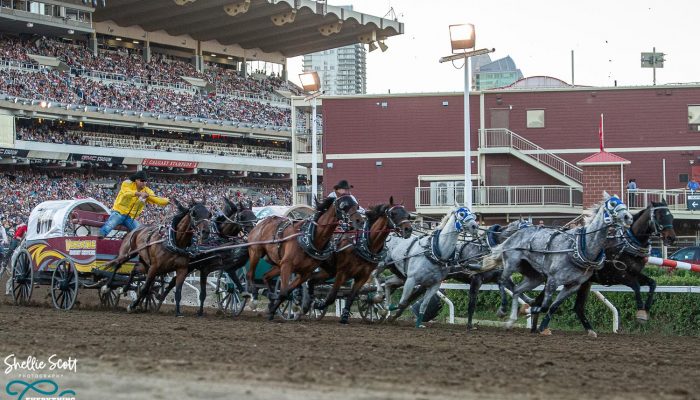 The heats were shuffled, the temperature was hot, and drivers and horses are giving it there all to try to qualify for Sunday’s Championship final at the Cowboys Rangeland Derby ran on a perfect Thursday night. When night 7 wrapped up, Chad Fike, driving the Shaw GMC Chevrolet Buick, broke his own track record and collected his third first place cheque in 7 days after a swift run of 1:12.61.

From barrel position number 1 in the 8th heat of the evening, Fike was the top wagon on the night by 39 one-hundreds of a second over Obrey Motwowylo who also competed in heat number 8. Vern Nolin won third money on the night, with Chance Bensmiller and Layne MacGillivray filling out the top five runs on the night.

For the third consecutive night, Layne MacGillivray is the leader in the overall aggregate standings with a seven run total of 8:37.16. Kurt Bensmiller is still in control of second place overall, trailing MacGillivray by 78 one hundredths of a second with Obrey Motowylo holding tough to third place overall. The top 3 in the aggregate after Saturday, July 16, 2022 will go into the championship final heat.

With 3 runs to go to try to earn a spot in Sunday’s championship final heat, Darcy Flad is on the outside looking in, but just 1.95 seconds back of third place, with Chad Fike now in 5thplace overall, but nearly 3 second back. The winner of the championship final heat will be declared the 2022 Calgary Stampede Cowboys Rangeland Derby Champion.

Live coverage of day 8 of the 2022 Cowboys Rangeland Derby can be seen on Friday Night, July 15, 2022, on Sportsnet One starting at 8:30pm local time. Check your local listings.