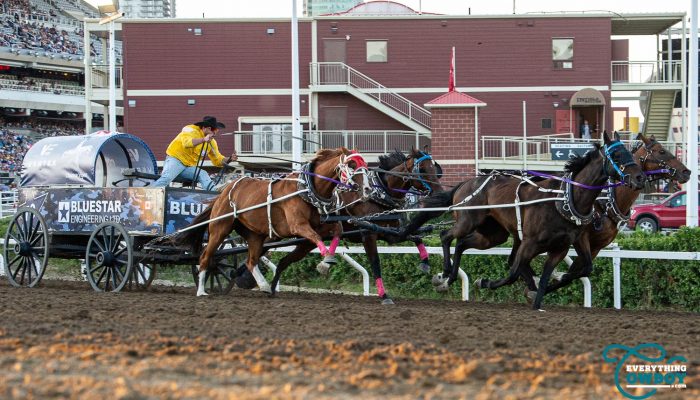 It was a pleasant evening in Calgary as night 6 of the Cowboys Rangeland Derby ran on a perfect Wednesday night. After some impressive runs all week long, it was Chanse Vigen’s turn to take top honors for the day after a speedy run of 1:12. – the fast time of the week so far.

From barrel position number 3 in the final heat of the evening, Vigen, driving the Vertex outfit, was the top wagon on the night by 26 one-hundreds of a second over 2016 Champion Kirk Sutherland. Overall leader Layne MacGillivray was third, 4-time champion Kurt Bensmiller was fourth, with reigning World Champion Obrey Motowylo placing fifth for the second consecutive night.

The drivers have now completed 2 full turns through each barrel position, and Layne MacGillivray continues to lead the overall aggregate standings with a six run total time of 7:23.45. Kurt Bensmiller is still in second place overall, just 64 one hundredths of a second behind the overall leader MacGillivray, while Obrey Motowylo hanging on to third place overall. The top 3 in the aggregate after Saturday, July 16, 2022 will go into the championship final heat.

Live coverage of day 7 of the 2022 Cowboys Rangeland Derby can be seen on Thursday Night, July 14, 2022, on Sportsnet One starting at 8:30pm local time. Check your local listings.