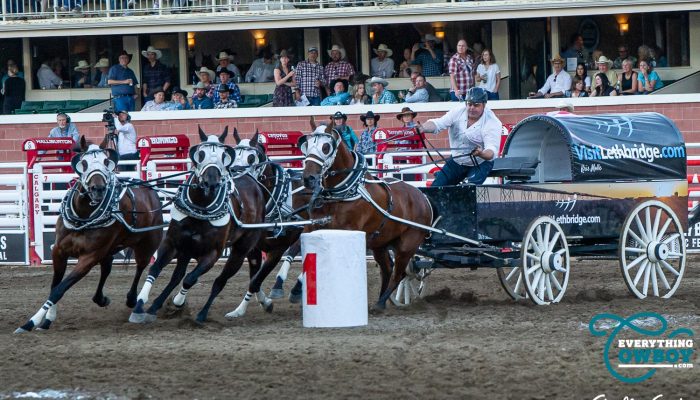 Monday was not only the start of a new week, but the start of a new barrel draw as all nine heats were re-shuffled at the Cowboys Rangeland Derby. It was a hot and sunny evening in Calgary, temperatures reached 25⁰C, and the crowds in GMC Stadium were treated to some exciting chuckwagon races. At the completion of night 4, it was reigning Medicine Hat Stampede Champion Kris Molle, driving the visitLethbridge.com outfit, who smoked them all tonight after posting the fast time on the evening with a run of 1:12.94.

From barrel number 1 in the 8th heat, Molle outran Mark Sutherland by 56 one-hundredths of a second to win the night’s first place cheque. Layne MacGillivray continued his solid performance with a third place run, followed by Kurt Bensmiller and Chanse Vigen who completed the top five times on the night.

Chanse Vigen has moved up to the top of the overall aggregate standings with a four-run total of 4:55.59. That puts him 18 one-hundredths of a second ahead of Layne MacGillivray who moved up into second spot overall. Kurt Bensmiller is now third, with Obrey Motowylo is in fourth place overall, 86 one-hundredths of a second out of a birth in the top 3, with Mark Sutherland now in 5th place overall, a little more than a second out of the top 3. The top 3 in the aggregate after Saturday, July 16, 2022 will go into the championship final heat. The winner of the championship final heat will be declared the 2022 Calgary Stampede Cowboys Rangeland Derby Champion.

Live coverage of day 5 of the 2022 Cowboys Rangeland Derby can be seen on Tuesday Night, July 12, 2022, on Sportsnet One starting at 8:30pm local time. Check your local listings.