MAGRATH, Alberta — Saturday’s Celebration for the Two Bit Nation #2 is one bull riding you don’t want to miss if you’re anywhere in Southern Alberta or Northern Montana.

This year the event is in support of yet another great family as we talked about a couple weeks ago.

Bull riding wise, Josh and Tammy Berezay put together the most professional back yard bull riding I have been to yet last year and I’m sure it’ll only be better this year. I’m disappointed I won’t be there personally this year but wish the crew, fans, bull riders and Berezay Family all the best!

Until Saturday afternoon, here are a few of my picks for round one on

Cooper Zur vs. 43 Real Deal – I’d say this is one of the tougher draws in the long round but if Cooper makes the whistle he could easily win the round. Either way, it’s up to him.

Ashton Arychuk vs. 5 Elvis – The Two Bit Ranch has a sweet draw in this little white horned bull. I’m betting on Ashton here for a score of anywhere from 82 to 85 unless he stubs his toe. Elvs will make a guy pay if he makes a mistake.

Josh Birks vs. 24hr Ted – For those of you who haven’t heard the story yet, this bull is actually named after me. I was with Josh and Tammy in Williston, ND last fall and on my laptop non-stop nearly any time of the day. At least that’s where I think the name originated, it may have been Vegas too.

Birks has a great one drawn here though and will be tough to beat defending his title.

Tim Lipsett vs. 68 Blue Print – Tim has focused most of his time this season in the PBR here in Canada and in Pro Rodeo. That’s put him 30th so far in the BRC but in Magrath he’s got a bull to win the round on. My money is on Tim here coming up big and getting his spot in Lloyd with a ride or two on Saturday started off by this one.

Zane Lambert vs. 210 Norandan Lights – “This bull has no chance,” Stock contractor and owner of this bull, Nate Gardner. Zane has some points to make up here if he wants to be at the #BRCFinals in a few weeks. He’s got to ride a bull to do get there and it sounds like he’s got one to do that on.

Round one draw for the Celebration for the Two Bit Nation #2 starting at 2:00pm MST at the Two Bit ranch North East of Magrath, AB. 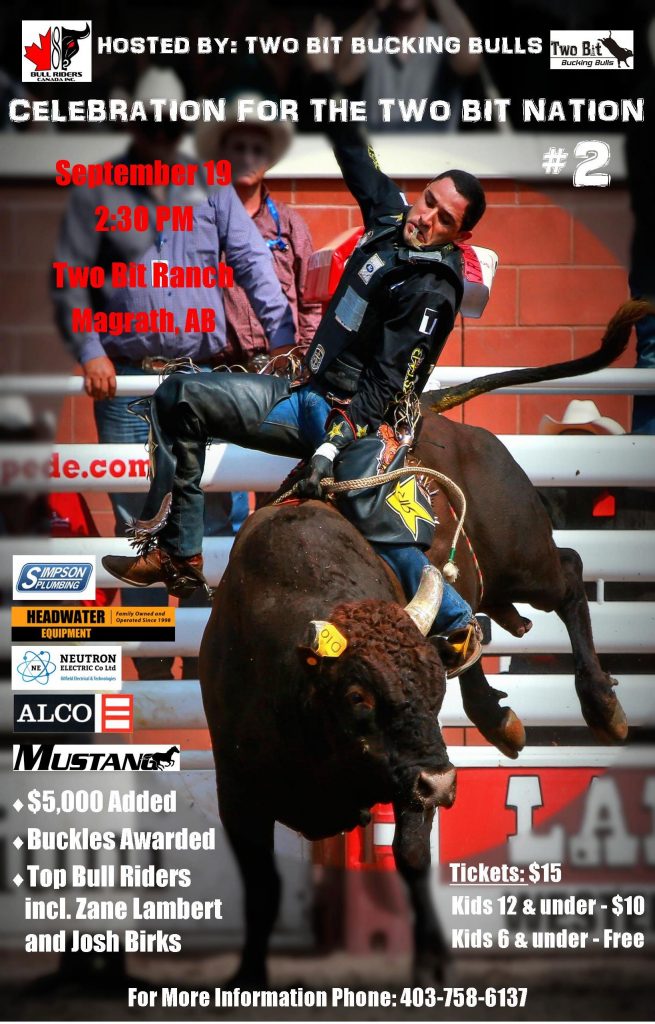